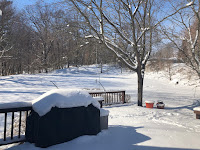 "If you go back a few hundred years, what we take for granted today would seem like magic - being able to talk to people over long distances, to transmit images, flying, accessing vast amounts of data like an oracle. These are all things that would have been considered magic a few hundred years ago." ~Elon Musk
"I have always had this view about the modern education system: we pay attention to brain development, but the development of warm heartedness we take for granted." ~Dalai Lama 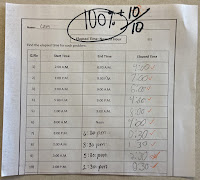 We calculated that this was the very first week Cam was in person at school for five consecutive days since last March.  He has been far more fortunate than many of his peers across the country.  Each day, our 13-year-old eagerly boards the bus for school.  He is learning the art of elapsed time and will typically talk about how much time it is until dinner, nighttime routine, and the next school day. 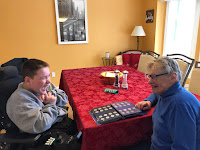 This week, Cam's grandparents were with us for five nights due to scheduled appointments in Grand Rapids.  We had a good time planning dinners and relaxing in the evenings.  Oma and Cam continued filling in his quarter book and it seems no matter what they are doing, laughter typically follows. 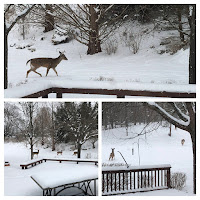 On Saturday morning, as they were packing up to leave, we were fortunate to see a few deer making their way through the snowy backyard.  It seems no matter how often we see the wildlife, we never tire of the scenery.

The colder temperatures stayed with us all week and Sunday was Cam's final adaptive ski lesson.  Jane had promised her son she would ski with them.  As we were getting ready to leave for the slopes, the temperature settled in at 12 degrees. 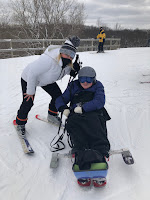 Since Cam had followed through on his commitment, his mom definitely felt compelled to do the same.  We were all armed with hand warmers and bundled up.   Cameron kept assuring his mother there was nothing to be nervous about.  After the second run down the snowy hill, Jane was in complete agreement and Cam said it was an awesome day for skiing. 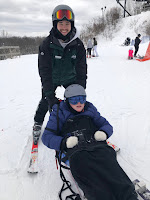 As we all chatted near the chairlift, a woman approached our skier and asked if he was Lorelei.  He promptly said "no" and a group near us quickly called her over.  Since Cam was so bundled up, you couldn't even see his face with his mask on.  After the woman left, we all had a hearty laugh.  Scott, who rides up the chairlift with Cam, told us at the top of the hill that our son couldn't stop cracking up and talking about the mix-up. 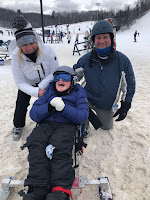 On the drive home, a detour was made to surprise Jane with a gorgeous bouquet of flowers and pick up delicious warm Starbucks drinks for all.

February 14th is very memorable for the Weatherfords.  It is the day Chris and Jane met, the day Chris proposed and the date of their honeymoon. 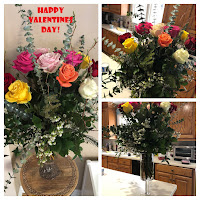 Jane declared it was one of the best Valentine's Day ever!  Family skiing, beautiful roses and a day full of laughter ranks pretty high up there.

Cam is a fan of giving and receiving hugs.  He especially likes a group hug with his parents.  For Valentines, he gave his mom an extra big squeeze and told her:
"I am giving you affection."
Posted by Special Moms at 8:40 PM