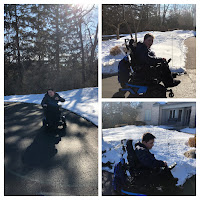 “Gratitude can transform common days into thanksgivings, turn routine jobs into joy, and change ordinary opportunities into blessings.” ~William Arthur Ward
Tuesday morning, Cam was back in business and beyond excited to be returning to school!  As he headed out the door, Jane told him he hadn't stopped smiling.  He said "I am grinning from ear to ear!"
He never exhibited any symptoms during quarantine.  We were all beyond thankful for his good health.
It was a rare dose of sunshine that arrived in the afternoon as a super smiley Cam debarked from the bus and headed up the driveway.  He was full of news from the day's activities. 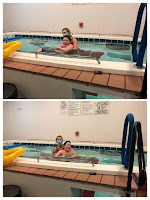 On Thursday, PT and swimming appointments were on the agenda for our son, eager to return to his routine.  PT is up first with stretching, standing and walking.  Immediately following physical therapy is swimming therapy.
Currently, we are at the same location for both sessions which is very convenient.  Ms. Mandy is Cam's pool instructor.  Even though the pool is smaller than average, it has plenty of space for the continued stretching, floating and kicking and is set at a pleasant 95 degrees.  There is also a hydraulic lift which Cam thinks is so cool.  As a bonus for Jane, Ms. Mandy was able to answer every question her student had about the lift and how it worked. 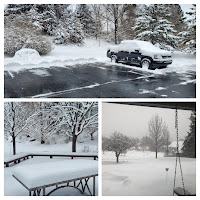 By the time, Jane and her son left the PT appointment at 5pm, it was snowing like crazy!  The first real snowstorm had arrived and it did not disappoint.  A text message arrived before Cam went to bed indicating that school was already canceled for Friday!  We couldn't believe it.  By morning, though, as the white stuff continued to fall and the temperature was in the single digits, we were relieved that no one had to brave the incredibly cold and blowing conditions. 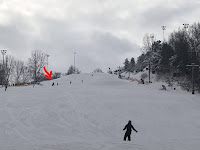 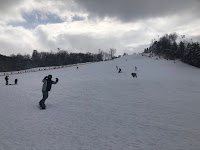 On Sunday, the high temp forecasted was 12 degrees.  We gave Cam the option of skipping skiing due to the incredibly chilly conditions.  Chris and Jane were pleasantly surprised when their son opted to keep the scheduled time.  As we headed out to Cannonsburg, we weren't certain how long Cam would be able to withstand the cold.  Jane silently guessed 30 minutes.  Once again, the parents were mistaken as Cam went up and down the hill multiple times for an hour.  He declared it was his best ski lesson yet!  We explained to Cam on our drive home that we did not think he would want to hit the slopes because of the cold.  He told us "it was awesome!"  We told him that being able to follow through on a commitment is pretty awesome too.  As an extra bonus, the hills weren't quite as crowded, perhaps due to Superbowl Sunday, but more than likely due to the extreme frosty surroundings.
Camology Quotes:
Cam was able to sleep until 7am during quarantine so when Tuesday arrived, it was back to a 6am wake up.  Cam called out to us at 5:55am.  When we asked him if he was ready to get up, he responded with a typical teenager comeback:
"Technically, I am not awake until my alarm clock goes off!"
Posted by Special Moms at 7:06 PM