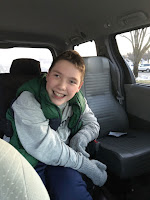 "Niceness is the psychological armor of the people-pleaser."  ~Harriet B. Braiker
"Good manners will open doors that the best education cannot." ~Clarence ThomasIn the mid-18th century, the first, modern English usage of etiquette (the conventional rules of personal behavior in polite society) was by Philip Stanhope, 4th Earl of Chesterfield, in the book Letters to His Son on the Art of Becoming a Man of the World and a Gentleman (1774).

Using your manners has always been very important in our daily lives.   "Please" and "thank you" are only a portion of good etiquette and proper language.  Once Cam was able to verbalize his thoughts and speak in sentences, his gracious way of asking for things and being grateful was paramount.   Our son does need to ask for assistance and help more often than most.  We have always explained to him that others always want to be treated with respect and remembering your manners and being thankful show that.  Just like most kids, he still needs reminders now and again, but by and large, he truly is one of the most polite 13-year-olds we know...of course, we may be a bit bias. 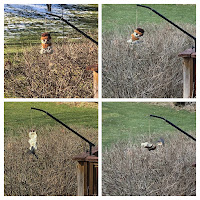 The Raisch family dropped off an extra holiday present for Cam this week- an edible snowman birdfeeder!  We love consumable gifts and found the perfect spot in our backyard.  The birds found it right away and after a few days, they had put enough weight on it to switch from vertical to horizontal.  We watched cardinals, chickadees and even a woodpecker take turns on the snowman.  Cam had a perfect view from the sunroom to see all of the activity. 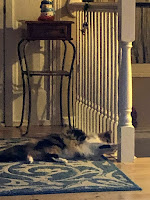 Most evenings, when it's too dark to see the birds outside, the indoor entertainment turns to our cat, Stella.  Chris made a "toy" for her containing catnip in a clear plastic container and tied it to the railing.  Every night, she bats it with her paws and at a glance shows the playfulness of a kitten vs. the 14 year old cat she actually is.
On Sunday, it was time to hit the slopes again for Cam's second ski outing at Cannonsburg with CCSA.
Due to the colder temps this week and a bit of light snow, the hills displayed more white stuff with most of it being artificial. 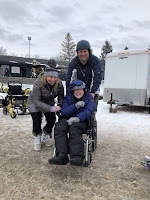 Although Cam was still a bit nervous, he settled right into the routine of riding up the chairlift and flying down the summit with his arms outstretched.
Chris was able to catch some awesome video of his son once again while Jane remained at the bottom of the hill waiting to see Cam come into view.
Everyone was more at ease this week with round two and even though it was chilly, the group lasted almost 90 minutes.
Following the adaptive ski lesson, we had transferred Cam back to his chair.  Without any prompting, he quickly said "Thank you very much!" to his CCSA team of helpers.

Sometimes we remain silent if Cam forgets to use his manners and he typically picks up on the hint.  On one such occasion this week, he quickly changed his request...
"May I please have your help with this?  Please and thank you!"
"You cannot resist, can you?"
Posted by Special Moms at 7:48 PM