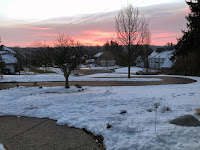 “The Mountains do not recognize disability, Only Determination” ~Jim MilinaMany activities and advantages are born out of necessity.

Adaptive sports began as a means to rehabilitate veterans from World War II, Korea, and the Vietnam War.  Among the early pioneers of adaptive skiing was Jim Winthers, a WWII veteran who was a member of the U.S. 10th Mountain Division – the Skiing 10th, an elite group specifically trained for alpine warfare. In 1953, Winthers was director of the Donner Ski Ranch in Northern California. Reunited with two buddies who lost legs in the war, and using techniques he saw in Europe, he taught them to ski on one leg.  He later was sought out by Jim Graham, a former skier who lost his leg to cancer and wanted to learn Winthers’ techniques. Two years later, Graham and Winthers and two others began developing techniques to impart skiing and teaching methods at weeklong clinics.  Eventually, Graham and Dan McPherson became the first and second certified ski instructors with a disability. 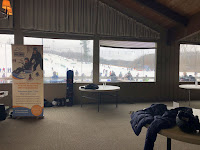 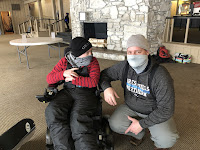 Locally, Cannonsburg is the closest place to ski.  Fortunately for our family, the CCSA is part of the organization.  The Cannonsburg Challenged Ski Association (CCSA) was established in the early 1980’s as a volunteer effort to offer individuals with disabilities the opportunity to participate in winter activities. CCSA started with only ten students, one outrigger, a bamboo pole and one sit ski, and has now evolved over the years into a professionally trained organization with a full range of adaptive equipment, ready to serve a wide variety of needs.

When we arrived for Cam's skiing lesson after lunchtime, we had ample time to get ready.  Our son's preference to be early paid off.  The parking lot was full but we were able to snag a close spot, which we were thankful for due to the soggy mud surrounding all of the cars.  It was close to 35 degrees and the slopes were busy. 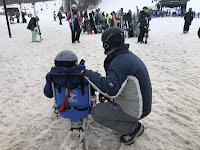 The 3 individuals assigned to Cam were Scott, Sydney and Kristin, all GVSU students.  It was no surprise to Chris and Jane that Cam needed the adult adaptive ski versus the youth one.
Outfitted with his new gear from Christmas, Cam was ready to go.  He told us he was excited, but a bit nervous.  The CCSA team was ready to get Cam on the chairlift.  The lift is stopped momentarily to enable the crew to position Cameron appropriately for the ride up the hill.  Chris was able to follow just a few minutes behind the team each time. 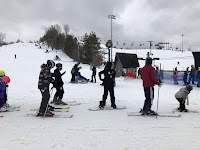 We watched Cam's confidence grow with each run.  Even though his ski caught the snow a couple of times leading to some minor wipeouts, he was unharmed and ready to continue.  (Thankfully, Jane missed seeing both of these!) After multiple runs down the slope, his two-hour lesson was almost complete.
We have definitely learned to be more appreciate of activities and we are grateful to have our own community offer such awesome programs!
Lesson 1 of 5 = ✅
Camology Quotes:
During the weekly ride to PT and indoor swimming sessions, Cam and his mom typically chat about their days.  Jane had an especially long day of work and suddenly let out a very loud yawn.  As she glanced in the rear view mirror, she noted her son similarly expressed the same.  Cam's mom couldn't help but smile and say...
"Yawns are contagious and I made you yawn.. hahahahaha!"
"Mom, that is no laughing matter!"
Posted by Special Moms at 7:47 PM