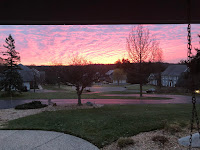 "Gratitude is a quality similar to electricity: It must be produced and discharged and used up in order to exist at all." ~William Faulkner

"Rest and be thankful." ~William Wordsworth

Every day is like a reset button.  We get to start over.  Regardless of what happened yesterday or last night, it's the opportunity to begin again.

With the upcoming holiday, our school district opted to cancel classes for Monday and Tuesday, along with the planned closure of Wednesday - Friday for the Thanksgiving holiday.  It meant re-juggling work meetings for Cam's parents, but it also led to more quality time with Cam.  Our son seems to have an uncanny ability to keep his mom and dad on task better than they are able to. 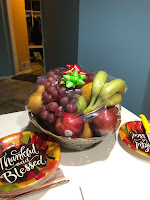 On Wednesday, we were excited to welcome Oma and Opa.  Since we have only visited in person between our two homes the past couple of months, we all concurred we would be safe in each other's company.  Cam's grandparents arrived with a beautiful fruit basket.
We made a home-cooked meal for Wednesday dinner and settled in for the evening.  Cam had a tough time sleeping and woke up extra early on Thursday, anticipating his favorite turkey dinner.
It turns out Cameron loves tradition.  It is a comfort to be grounded in the known entity of something taking place over and over again.  Every Thanksgiving, Cam has been given the task of making homemade stuffing with Opa and homemade pies with Oma.  The stuffing is made with herb roasted breadcrumbs, sautéed celery and onion, along with chicken broth.  First, though, the 'extras' in the turkey cavity are removed prior to adding the delicious mix.  Then a piece of bread is used to keep all of that delicious stuffing inside, along with a few toothpicks. 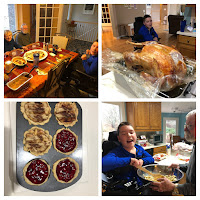 While the bird was cooking in the oven, Oma and Cam made some homemade applesauce along with the apple pie filling for the mini pies.  Cam's grandma has always made pie crust from scratch and we can all attest to the fact that you can absolutely taste the difference.
Speaking of taste, one of Cam's most important jobs is taste-testing.  He is particular about the applesauce not being too sweet and the same holds true for the pies.  With all of the freshly-made dishes, we did manage to support our local store by picking up the deli green bean casserole and sweet potatoes, along with the cherry pie filling. 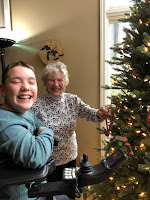 Following a most delicious feast, we opted to put the miniature pies in for baking after we ate to give our bellies a bit of a rest.  The early dinner and dessert was topped off by watching the "Elf" movie as a family.
On Friday, we had a busy day.  First up was the Christmas tree decorating, led by Jane and her mom.  This was the first year Cam was able to get right up to the tree with his stand-up chair!
Chris and his son dropped off an enormous load of returnable cans and bottles to our local hardware store where they were collecting for veterans.  After that errand, they were off to Alternatives in Motion to donate Cam's old green powerchair along with a manual wheelchair we picked up at the beginning of summer that he's already outgrown.  It was a very successful day topped off with our evening meal from a family favorite, Culver's. 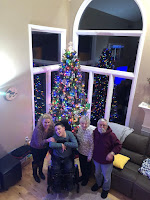 After saying goodbye and sending leftovers home with Oma and Opa, Cam was ready to help with weekend projects.
Due to our son's project management skillset, he and his mom finished holiday cards and ordered them, along with a few other surprises.
Cam and his dad finished up some home automation. They added the Christmas tree lights to the Alexa request "Light up the living room" which illuminates the tree and all other lighted elements in the area including the picture frame, scrabble board and family photo sign.
We have so much to be thankful for and Cam's Thanksgiving blessing was truly a sign of current times.  "Thank you for my family, for Oma and Opa and my parents even though there is covid I hope we stay healthy.  And thank you for my turkey! Amen." 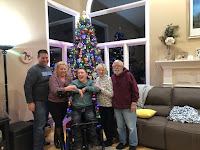 Camology Quotes:
For the last few years, we have opted to purchase a local fresh turkey.  Jane started calling around just a week before Thanksgiving and was coming up short.  Heidi's Farmstand recommended Otto's Turkey Farm in Middleville.  Jane called and discovered they don't take reservations and "have never run out of turkeys, but they've never done this in a pandemic." Cam and Jane drove there on Tuesday morning.  Cam had never been to a turkey farm before which is why he may have asked this critical question while we were driving.
"Mom, we are picking up a dead turkey, right?!"
Posted by Special Moms at 7:38 PM