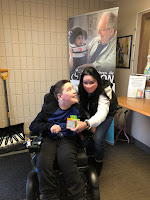 The moments of happiness we enjoy take us by surprise. It is not that we seize them, but that they seize us.  ~Ashley Montagu
True surprises seem far and few between.  The meaning of surprise as "something unexpected" was first recorded in the 1590s, that "feeling of astonishment caused by something unexpected" is circa 1600.
When Jane received a text message from Coleen at Alternatives in Motion, it seemed a bit cryptic.  She asked if we could bring our son to the AIM building on Wednesday.  Fortunately, Wednesday is a virtual school day for Cam.  After checking Chris and Jane's work schedules, we all decided that 1pm would be our magic time slot.
As we headed over, Cam kept asking why we were going and what it was for. When we arrived, Jane went in first to check in with Coleen.  She requested to have Cam come into the building.  Coleen explained to the Youth Ambassador, Mr. Cameron, that one of their longtime partners, Creative Studio, reached out to Coleen after seeing Cam receive the framed award on the Facebook Live event.
This was the correspondence they sent in email: "I noticed a picture for the Youth Ambassador award and talked with Ann (CFO of Creative Studio). After talking we decided he needed a nice award, so we wanted to donate this.😊"
The square is a large magnet and the "You Rock" letters magnetically connect on the left side.  The flame is also magnetic and has the words "You're on fire!"  It's quite obvious that the company name "Creative Studio" certainly shows its creativity.  We were all beyond impressed and thankful.

There are moments when a video message of gratitude captures how much something means possibly even more than the written word. 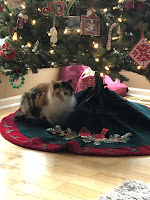 At school, Cam had to come up with a Christmas list.  The result made his parents laugh and most likely puzzled his teachers...
1. Underwear
2. A new coat
3. A new pair of shorts
4. New wrapping paper with toys on it
Posted by Special Moms at 6:57 PM