It is strange that social distancing, wearing a mask and coronavirus updates are a part of Cam's daily world.
His school district formally released a plan for back to school on August 31st.  Cam's special needs class plans to have the option of attending in person.  General education 7th graders will be splitting their time between in-person and virtual school for the first 4 weeks.  It did get us thinking about the history of special ed. 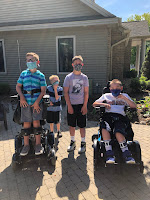 The story of Special Education begins in the early part of the 20th Century. Parents formed advocacy groups to help bring the educational needs of children with disabilities to the public eye. These groups gained momentum mid-century. In 1961, President John F. Kennedy created the President’s Panel on Mental Retardation. The panel’s recommendations included federal aid to states. In 1965, Lyndon B. Johnson signed the Elementary and Secondary Education Act, which provided funding for primary education, and is seen by advocacy groups as expanding access to public education for children with disabilities. Despite these two important events, by the 1970’s, only a relatively small number of children with disabilities were being educated in public schools. Both enacted in 1975, two federal laws would change this: The Education for All Handicapped Children Act (EHA) and the Individuals with Disabilities Education Act (IDEA). 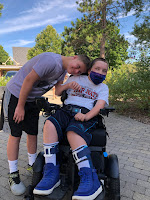 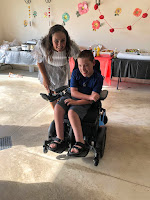 Cam had a social smoothie break planned at Brody's Be Cafe on Thursday.  Liam and his brother David, along with Cam and Brody all enjoyed a mid-morning break and catching up. 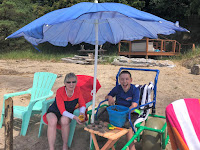 After work on Friday, we headed over to Lowell to see Mary Jo and celebrate her graduation.  As president of her graduating class, it was a different senior year for her since Michigan schools were out of session as of mid-March.  She was super excited to see Cam and made certain there were some Chick-Fil-A nuggets and Heidi's doughnuts for him to enjoy. 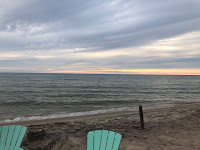 Our summer season is far too short and once again, the pull of Lake Michigan and the beach could not be resisted. 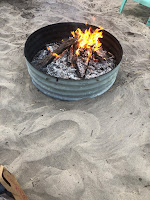 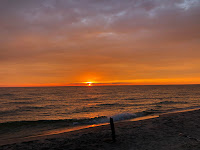 On Saturday we arrived in time for lunch and headed to the beach in the afternoon.  It was a partly sunny day and by the time dinner rolled around, it had clouded over.  As the evening progressed, though, the sun shone itself again.  It was visible enough to see it "dip" below the horizon, appearing to sink into the big lake.  The afterglow was especially picturesque with the different hues illuminated in the sky and reflected in the water. 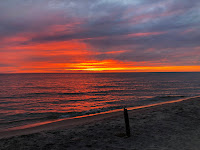 We never tire of seeing the poignant colors and still believe each sunset is entirely different.  Something else we don't get tired of... eating s'mores!  Although they do pretty much taste the same each time, they are still one of the most delicious desserts around!!

Cam and his grandma have always loved baking together in the kitchen and also pretending to bake on the beach.  Often, those lucky enough to be in the vicinity may be offered a treat.
"What kind of cupcake would you like?"
"A mint chocolate one, please"
"It is only free if you make it yourself!"
Posted by Special Moms at 9:15 AM