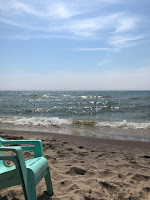 The best way of keeping a secret is to pretend there isn't one. ~Margaret Atwood
One of the secrets of life is that all that is really worth the doing is what we do for others. ~Lewis Carroll 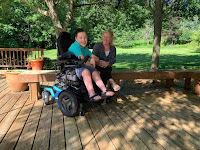 The modern English word secret comes from the Latin secernere, or to separate or distinguish. The prefix “se-” means apart, and “cernere” is to sift.

To keep a secret, then, is to keep some particular bit of information sifted apart from a particular person. As a psychologist notes, that’s one major reason for why keeping secrets is so difficult. Even if you’re the most loyal of friends, keeping something sifted is a cognitively demanding task, and our minds aren’t quite as nimble as we might hope for them to be. It’s a surprisingly complex maneuver: You have to keep in mind not only this privileged piece of information, but also what the person does and doesn’t know.  Cam spent the week keeping a secret surprise from his parents and he really did a great job.

On Friday, it was common knowledge that Cam and Jane were scheduled to be interviewed for the MI-UCP (Michigan's United Cerebral Palsy) organization for their upcoming new website.  Jane is on the Board of Directors and was requested to ask Cam if they could both share their thoughts.  It was quite exciting meeting the two professional videographers and seeing all of their equipment.  Our security camera captured the footage shown in the video of Cam racing down the driveway as part of the interview. 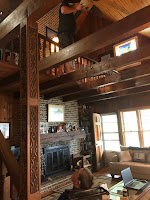 Saturday, we were once again on the road to Montague to spend time at the lake.  Chris wanted to install a remote for the ceiling fan and Cam, his safety supervisor, was guiding him through the effort.  The end result - Oma and Opa no longer have to have the light and fan both on at the same time.  Now, they can be controlled independently. 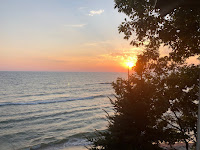 It wasn't quite the beach day we had hoped for, but it was a beautiful sunset.  Oma, Opa and Cam were quite busy putting up some decorations while Chris and Jane were away for a bit. 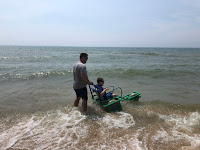 As the couple walked through the door, they were genuinely surprised to see a Congratulations sign and balloons along the mantle in honor of their wedding anniversary! 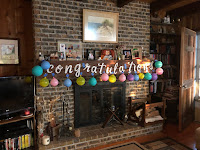 After a beautiful sunset, we spent the night and the next day enjoyed a picture picture sunny afternoon lakeside on Sunday.
There were still a few surprises in store for Cam's parents, though. 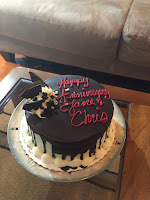 With the menu planning courtesy of Cam and Oma, we feasted on steaks and salmon, sweet corn, fresh garden beans and Oma's famous potato salad.  A decadent Ryke's Bakery cake along with Country Dairy ice cream topped off the meal.

17 years ago on this day, Chris and Jane exchanged vows on the Lake Michigan shoreline.  The beach has changed quite a bit in those years, as we all have, but it still holds strong, just as our family does.
Cam told his parents "I wanted you to have an anniversary you will never forget!"  And because of Cam and his grandparents, we never will!

Cam has become much more
independent sending emails, text messages and audio messages.  With email he will use the speech to text conversion.  During the week, he was sending correspondence back and forth to his grandma.  When his parents asked if he needed any assistance, his response was immediate.
"Do not read my email.  Oma and I are conspiring!"
Posted by Special Moms at 9:45 PM