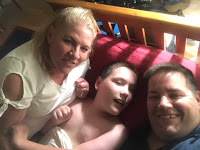 Whenever Cam is about to embark on a new experience, we tend to research the history or some fun facts.  Many of the planned activities through Mary Free Bed were canceled this spring and summer.  Jane received an email about the kayak clinic with MFB Adaptive Sports and we jumped at the opportunity.

6 Facts About the History of Kayaking 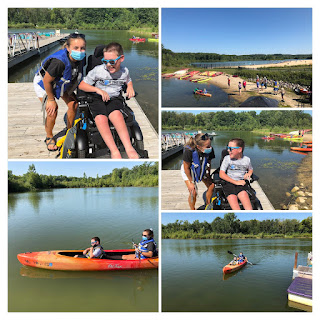 1. Kayaks are at least 4,000 years old. The history of kayaking dates back at least 4,000 years. If you happen to find yourself in Munich, Germany, you can see the world’s oldest surviving kayaks in the North American section of the Museum Five Continents. These kayaks are from the year 1577.
2. Kayaks were invented by the native people of Arctic North America. The first people in the world to build and use kayaks were Inuit, Aleut, and Yup’ik people. Often referred to as “Eskimos,” these indigenous people live in modern day Greenland, Canada, and Alaska.
3. The word kayak means “hunter’s boat” or “man’s boat.” Kayaks were originally designed for hunting. These small boats were perfect for creeping up on animals that lived in the water or along the shore. Common prey included seals, caribou, and whales.
4. The first kayaks were made from animal skins and whalebones. The Inuits and other native people made their kayaks by stitching animals skins together, often from seals, and stretching this material over a frame made from wood or whalebone skeletons. These early kayaking pioneers also used whale fat to waterproof their boats.
5. The International Scale of River Difficulty was inspired by an Austrian kayaking trip. Class 1 or Class 4 rapids is referring to this system. The creation of an international scale came about shortly after an adventurous man named Adolf Anderle became the first person in the world to kayak the Salzachofen Gorge on the Salzach River in Austria in 1931. 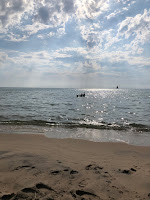 6. Kayak races were added to the Olympics in 1936. During the 1936 Berlin Olympic games, “flat-water racing” was introduced. In 1948, the Olympics added its first women’s paddling event: the 500 meter singles kayak. The first white water racing event premiered in 1972, and today, the Olympics have more than 10 white water competitions.

Friday morning, we grabbed Cam's lifejacket and headed to Millennium Park where there is a boathouse used for kayak, canoe and paddleboat rental.  Cam's parents thought he would be out for 30 minutes or so but he and his guide Alaina were on the water for more than an hour!  He said he can't wait to do it again next year. 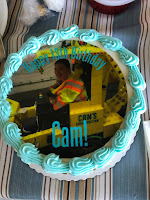 We arrived at the cottage Saturday afternoon and enjoyed more time in the water with our inflatable kayak as well as some swimming for Cam in the Cammobile.  For family Sunday brunch, we surprised Cam with an early birthday cake.  He chose his favorite pic from last year- his Lego construction backhoe that he and his dad made for Halloween.  Our favorite bakery, Rykes, made a delicious peanut butter cream filled chocolate cake.  Even though it was a day before Cam's actual birthday, we wanted him to have a few extra surprises this year.
As we were driving home on Sunday and pulled down our street, we caught Cam's reaction on video to something that was set up in our yard.
Thanks to a CardMyYard company, it was all ready and waiting when we arrived in the afternoon.
Cam's genuine surprise was priceless and one we will never forget. 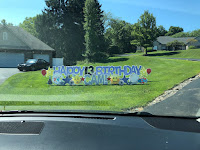 Oma and Opa drove into Grand Rapids as well and appeared shortly after we did.

As we settled in, we told our son it would be a good idea for us all to take a closer look at that sign.  Our entourage headed down the driveway close to 4:30pm. 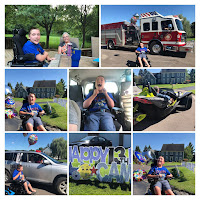 What Cam didn't realize was that Jane had sent out invitations for a drive-by birthday greeting!  As one car after another drove by with signs and a few drop-offs, we saw Dr. Lisa, Ms. Kathy (3rd/4th grade teacher) and Kevin, Ms. Barbara (K-2nd grade teacher), Mary Jo and Ms. Cris, our Flegel friends, Ms. Michelle (school PT since K) Liam (one of Cam's best buds) and his entire family, and Ms. Ann! 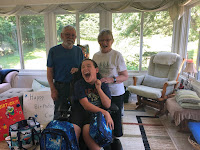 In addition to all of that awesomeness, Ms. Ann had contacted the Cascade Fire Dept to request their presence for the drive-by celebration.  They said they would absolutely be there (unless there was a big emergency, of course) and Cam couldn't believe it!  After all of the excitement, the dinner of choice was none other than Culver's.  Ms. Ann stayed too and we all enjoyed an outdoor feast of deliciousness.  Our Raisch family friends stopped by after dinner as well to check out the yard sign and bring Cam a sweet gift.
Oma and Opa gave their grandson a new school outfit and an awesome personalized backpack complete with lunch cooler.
It is said that there aren't too many real surprises in life that one encounters.  We believe we were successful in our quest to multiply the astonishment for a kiddo that continues to amaze us every day!

After Cam's first surprise birthday cake, he told told his cousins he felt like he was almost 13 but more like 25...then he announced to his parents Sunday evening...
"I really got the full treatment today!"
Posted by Special Moms at 7:55 PM