Busting out the Backhoe - Week of Oct. 28th 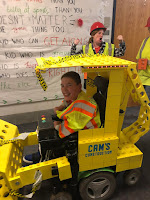 "Everything is better when we stick together." ~ The Lego Movie

The Lego Construction backhoe costume, chosen by Cam, and designed by father and son, made a few more appearances this week. 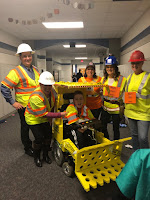 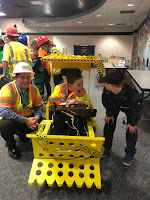 Lego has quite an interesting history...The Lego Group began manufacturing the interlocking toy bricks in 1949. Movies, games, competitions, and six Legoland amusement parks have been developed under the brand. As of July 2015, 600 billion Lego parts had been produced. 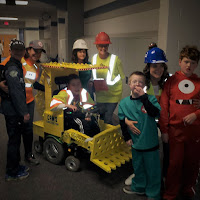 The Lego Group began in the workshop of Ole Kirk Christiansen (1891–1958), a carpenter from Billund, Denmark, who began making wooden toys in 1932. In 1934, his company came to be called "Lego", derived from the Danish phrase leg godt which means "play well". In 1947, Lego expanded to begin producing plastic toys. In 1949 Lego began producing, among other new products, an early version of the now familiar interlocking bricks, calling them "Automatic Binding Bricks". These bricks were based on the Kiddicraft Self-Locking Bricks, which had been patented in the United Kingdom in 1939 and released in 1947. Lego had received a sample of the Kiddicraft bricks from the supplier of an injection-molding machine that it purchased. The bricks, originally manufactured from cellulose acetate, were a development of the traditional stackable wooden blocks of the time. The Lego Group's motto is det bedste er ikke for godt which means "the best is not too good".   This motto, which is still used today, was created by Christiansen to encourage his employees never to skimp on quality, a value he believed in strongly.

This is the final year for a school costume parade for Cam.  His friends all dressed up and his teacher and aides were all decked out in construction outfits to be a part of Cam's crew!  The construction backhoe completed a lap around the gym.  Cam's principal said she would make certain the pic she took of him made it in the yearbook. 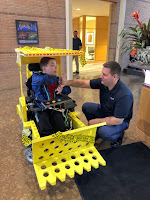 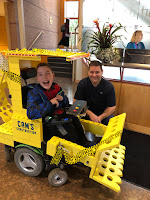 The very next day was trick/treating at Fishbeck where Chris works.  Jane picked up their son and headed over to the office at 4p where Chris hooked everything up and proudly accompanied his son through the first floor.  One of Chris' colleagues, Mr. Mike, can't wait to see Cam every year.  He actually had 4 large size bags of m&m's set aside just for him.

As we bid farewell to all of the Halloween festivities, a few commented that Cam would have surely won most every costume contest in town.
For Cam's parents, the best reward is seeing their son's reaction to his creative compilation and truly, seeing other kids comment how cool and awesome it is.  It really is the best invisible trophy.

Camology Quotes:
Cam is back to his walking routine at his physical therapy appointments and likes to adhere to instruction and homework.

Cam: "Mr. Patrick, could you write me a note that says I need to walk at home if I don't walk at school?"
Mr. Patrick: Sure, Cam.
"Actually, never mind.  I will write myself a note!"
Posted by Special Moms at 7:27 PM