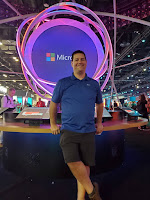 "May we think of freedom, not as the right to do as we please, but as the opportunity to do what is right." ~Peter Marshall

While Chris attended a conference this week in Orlando with 30,000 other people, Cam entertained 2...his mom and Auntie Karen back in GR and had a few fun-packed days. 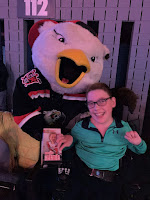 At school, the kids were getting ready to go see a Grand Rapids Griffins hockey game.
The Grand Rapids Griffins were formed in 1996 and have played in the American Hockey League since 2001. They are the only amateur team to have been affiliated with the NHL professional team, the Detroit Red Wings. In total, 165 players and goalies have gone on to play at least one game in the NHL. Additionally, 15 Griffins have gone on to win the Stanley Cup. Even though they are one of the younger AHL teams, the Grand Rapids Griffins have seen recent success in the past five years with winning the Calder Cup in 2013 and 2017, which is basically the Stanley Cup for AHL teams. 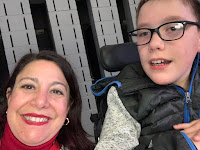 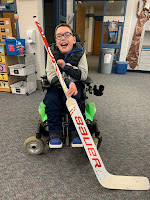 Cam was a bit unsure about how loud the game would be but he declared it was so much fun and the best field trip ever!  While they were waiting for a school bus for pick up, two complete strangers walked over to Cam and gave him the goalie hockey stick from the game!!  What an amazing gift and one that our son is excited to play with outside. 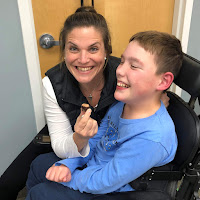 On Thursday, Jane and Cam had a couple unexpected events in the evening.  First, at Physical Therapy, one of the PT's Cam has worked with over the past 2 years was moving out of the area and it was Cam's last time to see her.  Ms. Julie has always teased Cam about skipping PT to go get ice cream.  So, Mr. Patrick surprised everyone by providing some delicious ice cream treats for all to share! 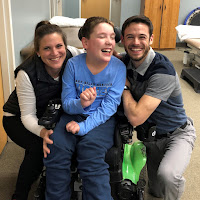 Jane received a text during PT indicating she and Cam needed to pick up some fundraising food at his school before 7:30p.  They got back in the van at 6:50p ready to head out.  Unfortunately, the van battery was dead.  Luckily, Mr. Patrick found a co-worker with some jumper cables and after several chilly minutes, Cam and his mom were back on the road.  They made it to school in time, but left their van running.
The week went by quickly and Auntie Karen's expert assistance has become synonymous with "lifesaver."
Jane and Cam headed out Friday evening to pick up Chris at the airport and both declared, "we sure did miss you!" and not just because the van battery died😉

Camology Quotes:
In preparation for the field trip to the Griffins Game, each student was asked to write a letter to Veterans to bring to the game.
Since Cam's dad is a former Marine, he was very proud of his son after reading the following letter Cam wrote:

"Thank you for being in the military.
I think it is very kind of you to keep us safe.
Thank you for serving America."
From,
Cam
Posted by Special Moms at 9:48 AM