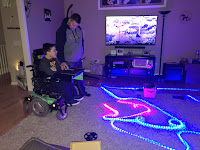 A new project began at the Weatherford household this week.  Father and son decided that the tradition of installing the outdoor Christmas lights year after year needed a technology upgrade.
With all of the experience and knowledge of Halloween costume lighting, the boys transferred that background to create a plan for LED lighting outside.

Cam is always intrigued by science and wants to know how things were made and when.
The first Light-Emitting Diode (LED) with practical use was first documented in the 1950's.  Gallium Arsenide had started experimentation with the use of the semiconductor that subsequently led to the development of the very first LED with practical use. In 1962, Nick Holonyak, Jr. invented the first LED that could produce visible red light. 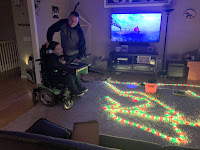 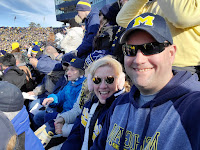 Nightly work of connecting the reels of light together and determining how to get power to the roof-line without running multiple extension cords became a part of every evening discussion. 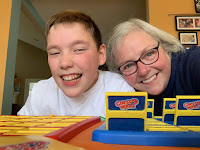 Each week, Cam continues to work diligently at PT.
The weekend brought a visit from Mary Jo on Friday evening while Cam's parents wrapped up the Halloween project
with a recap and dinner.

Saturday morning, Ms. Ann arrived to hang out with her buddy all day and into
early evening.  Chris and Jane were off to Ann Arbor to see the big U of M football game up close and personal, thanks to Ms. Molly and her mom, Bobbi.  The game was chilly, but exhilarating as we watched with over 111,000 other people.

Back in Grand Rapids, Ann and Cam spent the day playing games, visiting Heidi's farm stand and even finishing some school work.  Ms. Patti stopped by a couple of times to help out and it was a treat for both Cam and his parents to have separate fun-filled days.  We are grateful for these priceless gifts.
When Ms. Ann accidentally left her winter vest behind, Chris took the opportunity to send a pic of him modeling the coat.


Although Cam's dad didn't hold onto the warm garment, Cam's mom was given a big surprise this week that she was more than happy to keep.  At school, Jane met with Cam's teacher for a conference update.  After hearing a glowing report, she stopped in the media center to check out the scholastic book sale.  While there, Cam's mom purchased some raffle tickets for a gift basket.  It was filled with a new cookbook, treats, candles, soap and a warm blanket.  Jane couldn't believe it!  Cam declared it was like 'winning the lottery!' 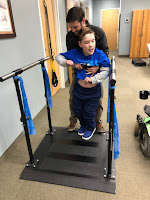 Camology Quotes:
Cam had a physical at the doc office prior to his physical therapy.  He had a flu shot plus 3 other shots for 12-year physical.  Cam has always done well with medical shots and seems to barely flinch.  I told his PT, Patrick, that he was a champ.
Patrick said, "wow Cam, you're tough!"
To which Cam replied:
"I'm as tough as a cookie that has been in the freezer for 4 days!"
Posted by Special Moms at 3:33 PM

You made some respectable points there. I seemed on the web for the difficulty and located most people will go together with together with your website. Data Cambodia

Iím not that much of a internet reader to be honest but your blogs really nice, keep it up! I’ll go ahead and bookmark your site to come back in the future. Cheers Result Sydney

Nice post. I discover something harder on distinct blogs everyday. Most commonly it is stimulating to learn to read content from other writers and rehearse a little from their store. I’d would rather apply certain with all the content in my small weblog regardless of whether you do not mind. Natually I’ll provide a link on your internet blog. Thanks for sharing. http://128.199.170.238/

Im happy I found this website, I couldnt get any information on this subject prior to. I also manage a website and if you want to ever serious in doing some visitor writing for me if possible feel free to let me know, im always look for people to check out my blog page. Please stop by and leave a comment sometime! http://165.22.245.133/

I am typically to blogging i truly appreciate your articles. This great article has truly peaks my interest. Let me bookmark your internet site and maintain checking for brand new info. http://www.sbobet.xn--6frz82g/

It is really a great and useful piece of information. I am glad that you shared this useful information with us. Please keep us up to date like this. Thank you for sharing. Bandar Togel 2021

Exclusive material, thank you to the writer. It is actually incomprehensible in my opinion at present, however in common, the usefulness and importance is mind-boggling. With thanks and all the best… Daftar Togel Terpercaya

There is noticeably a lot of money to understand this. I assume you made certain nice points in features also. Togel Online Resmi

A while the remarks are approved at promptly and sometime the comment predicted as comment spam or moderate it for approval. Do comply with blogs are very really hard to uncover and won’t be able to manage to reduce that our responses turn into spam and unapproved. There are several points. Bandar Bola

It might shore up better to ro along with your dealing with postpartum depression without needing paxil in case you are secured regarding it. slot pragmatic

Excellent! I thank you your contribution to this matter. It has been insightful. togel online

I think other site owners should take this web site as an model – very clean and fantastic style and design, not to mention the content. You’re an expert in this area! prediksi cambodia

My spouse and i have been very peaceful that Edward managed to finish up his inquiry out of the ideas he acquired through the web page. It is now and again perplexing to just find yourself giving away information and facts which usually some other people could have been making money from. We remember we need the website owner to be grateful to for that. All of the explanations you’ve made, the straightforward web site menu, the relationships your site assist to instill – it is all fabulous, and it’s assisting our son and us understand that topic is exciting, which is very indispensable. Many thanks for all! Bandarqq

There is noticeably big money to comprehend this. I suppose you made specific nice points in functions also. agen bola

A powerful share, I just given this onto a colleague who was doing slightly evaluation on this. And he in fact bought me breakfast because I found it for him.. smile. So let me reword that: Thnx for the treat! However yeah Thnkx for spending the time to debate this, I feel strongly about it and love studying more on this topic. If possible, as you change into experience, would you mind updating your weblog with extra details? It’s highly helpful for me. Massive thumb up for this weblog put up! idn poker

I love the tips on this site, they are always to the point and just the information I was looking for 토토사이트

I just couldn’t depart your site before suggesting that I extremely enjoyed the standard info a person provide for your visitors? Is going to be back often in order to check up on new posts 먹튀검증

When I originally commented I clicked the -Notify me when new surveys are added- checkbox and after this each time a comment is added I recieve four emails with the exact same comment. Could there be in whatever way you’ll be able to remove me from that service? Thanks! 온라인홀덤

Hi! I just wanted to ask if you ever have any problems with hackers? My last blog (wordpress) was hacked and I ended up losing months of hard work due to no backup. Do you have any methods to protect against hackers? planet88 slot online

I have been exploring for a little for any high quality articles or blog posts on this kind of area . Exploring in Yahoo I at last stumbled upon this web site. Reading this info So i’m happy to convey that I have an incredibly good uncanny feeling I discovered exactly what I needed. I most certainly will make certain to do not forget this site and give it a glance on a constant basis. Wslot88

I am just use very happy understand this. This can be the method of information which needs to be presented harmful . ” the actual random hype may possibly be inside the another webpages. Satisfaction from your individual sharing with us the following prime file. bk8