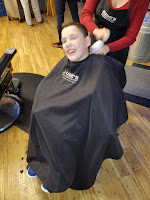 The dictionary defines a hero as "A person who is admired or idealized for courage, outstanding achievements, or noble qualities." 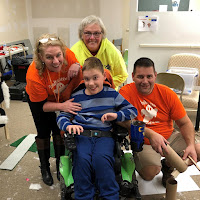 Maya Angelou may have a better definition: "I think a hero is any person really intent on making this a better place for all people."

It was our final week of parade preparation for our Halloween Heroes project with Mary Free Bed.  Cam had a haircut scheduled during the week and on Friday, he had a half day of school.  Ms. Ann awaited his bus arrival while Jane and Chris were in the final day of costume building downtown.  Not wanting to miss out on all of the activity, Cam and Ann made their way to HH HQ where our team of volunteers were quite busy, creating 3 new costumes for inpatients in one day and finishing up 6 others.  It was a very long day ending with more preparation and finishing touches for Cam's creation, housed in our own garage.  Our son's Lego Construction Backhoe was finally ready for it's reveal. 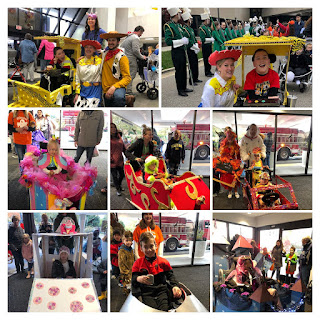 Saturday was the big day for Halloween Heroes!  This was the day all of our costumed kids are able to participate in a parade designed just for them!
Oma and Opa drove in before lunch to provide much needed assistance with all of the craziness yet to come.
We arrived at Mary Free Bed a little after 12p to review the time frame with our volunteer crew.  Our HH kids, ready to see their finished costumes for the first time were scheduled at staggered intervals to help things run smoothly.

The Kindness Club from Forest Hills Central middle school were on board for the second year to read to our costumed kids while they were waiting and provided face painting for those who were game.  The Forest Hills Central HS Marching Band readied their 120 talented members to form 'tunnels' on each side of the circle drive. 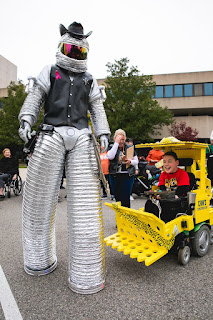 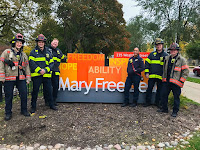 60+ volunteers took 8 full days spread out over the course of 5 weeks to create 34 original costumes for kids with different types of abilities.  The most important factor for our HH leadership team, which includes Cam, is that each kiddo chooses the costume idea themselves and approves of the design before creating begins.

After each Halloween Hero was announced by name and costume, two lines of 17 were formed on each side of the circle drive.  As we were waiting for all of the announcements, we spotted Ms. Amanda, Nick, Brooke, and one of our dedicated volunteers, their mom Mary.  Across the sidewalk, Ms. Michelle and Mary Jo and her mom, Ms. Cris were also there.  All of a sudden, a 7-foot tall space cowboy appeared and under the costume was Ms. Julie's boyfriend, Jeff.  What a great addition to our event!  The West Michigan Therapy dogs, as well as GRPD and GRFD were in full force too.

We followed the marching band with Cam as our Grand Marshal and paraded by St. Mary's hospital around a full city block, clocking in at exactly 1 mile.  Along the way, people and patients cheered and folks driving by honked and waved.  Even though rain was forecasted, it held off for our special event and we were unbelievably thankful for dry conditions.  We passed cousins Bob and Cheri along the way and arrived back at Mary Free Bed to a crowd of people.  Each of our kiddos had a professional photo taken as well. 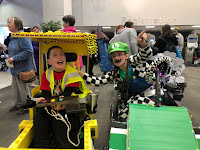 Two of Cam's very good friends were both in the parade.  Liam was a commander of the USS Voyager and April dressed as Luigi from Mario Cart.  When Cam saw her, he said "Hey April, when did you grow a mustache?" and proceeded to laugh hysterically at his own joke.
Mary Free Bed created a video and the local news station interviewed Cam and his mom for a few seconds.
Mary Free Bed VIDEO
WZZM13 Story
Saturday couldn't have gone better and Oma and Opa treated us to dinner that evening.  We can't thank them enough for all of their help.
As we were discussing the day's events, it's easy to see that all of us have heroes who surround each and every day 😃 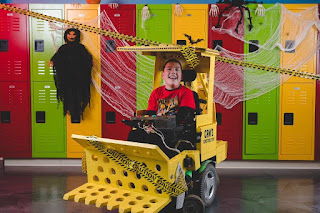 Camology Quotes:
Cam continues to hone his comedic skills, usually in the evening, right after his shower...

"Oh my goodness. We've been together for the longest time!"