“As you grow older, you will discover that you have two hands- one for helping yourself, the other for helping others.” ~Audrey Hepburn
“Volunteers don’t get paid, not because they’re worthless, but because they’re priceless.” ~Sherry Anderson
“If you think you are too small to be effective, you have never been in bed with a mosquito.” ~Betty Reese
We give and receive in so many ways on a daily basis.  Sometimes giving feels more rewarding than receiving.  As Brody's Be Cafe heads towards its opening day in Ada, its motto is "Fill up your soul, let your cup runneth over" which is a fitting phrase for the intention of inclusion and kindness.  Chris and Cam worked to finish up the wireless connectivity at the cafe this week.

As we headed toward the weekend, Cam assisted his parents with preparations for their family community project- Halloween Heroes with Mary Free Bed Rehabilitation Hospital.  This is our 4th year heading up the wheelchair Halloween costume endeavor. 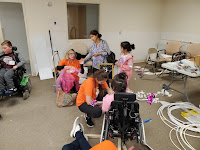 On Friday, Chris and Jane spent the day working on wheelchair costumes for outpatients after their son boarded the bus for school.
Saturday morning, Cam was ready to do his part too!  He traveled with us downtown to the hospital ready to work.  Before 11am, though, it was time to head out to the WMML field for our baseball player to participate in his last fall season game.  It was a chilly, but sunny day.  The Home Depot volunteers were in full force and Ms. Catherine, from HD, found Cam for the 3rd year in a row to be his helper!  Talk about a fun reunion.
The awards ceremony was right after the game where the medals are presented.  Ms. Mary Jo was hanging out with Cam for the day and her mom, Ms. Cris (Cam's former classroom aide) came to watch the action as well. 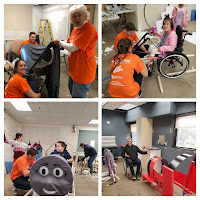 Immediately following the ball game, it was back downtown for Cam, Ms. Mary Jo and Chris.  Cam did an excellent job of greeting families and helping make choices for costume embellishments.  He and Ms. Mary Jo also strolled over to Biggby in the main hospital for a well-deserved coffee run for our volunteers.  So many families commented how nice and polite Cam was as he echoed to each family on their way out- "thank you for coming today."  We accomplished so much with our team of workers with two more weekends on the horizon.  We were all tuckered out that evening, but as we often say "it's a good tired." 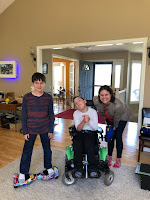 On Sunday, Chris headed to eastern Michigan for work while Jane and Cam steadily completed chores.  Auntie Jo and Will popped over for lunch since we hadn't seen Will since way before his September birthday.  He was anxious to show Cam his new hover board he received from his mom.  Cam though it was "so cool" how it moved.  It was, as Cam said "awesome to see them."
That evening, we dined on breakfast for dinner with the Raisch fam which was super delicious, easy and greatly appreciated.

At bedtime, Jane and her son were talking about the day and all of the helping that had taken place downtown for Halloween Heroes.  Cam wanted to make certain that all of the kids had picked their very own costume and not their parents.  Jane asked "why is that so important to you Cam?"  "Because Mom, it has to be their choice.  It is their costume and we are making it for them, not their parents."
Jane also thanked Cam for letting another kiddo, Diana, use a portion of his costume from last year that he and his dad had made.  Her son asked why it was such a big deal and his mom told him, "That Cam, is a perfect example of giving back!"

Camology Quotes:
We realized that some construction trucks had come through and removed the manhole covers on our street, leading us to believe it may be repaved soon.  Jane commented that it may make things interesting for Cam's school bus.
Cam indicated: "It is already interesting!"

Jane and her son were running errands one evening and Jane indicated their last stop would be Walgreens.  As she took a shortcut home, Cam noted his mom had missed a critical turn.
Jane said: "See Cam, I need you in the car to help me remember these things."
To which Cam replied puzzled: "Mom, I am in the car."
Posted by Special Moms at 9:43 PM