The custom of sending Christmas cards was started in the UK in 1843 by Sir Henry Cole. He was a senior civil servant (Government worker) who had helped set-up the new 'Public Record Office' (now called the Post Office), where he was an Assistant Keeper, and wondered how it could be used more by ordinary people. Sir Henry had the idea of Christmas Cards with his friend John Horsley, who was an artist. They designed the first card and sold them for 1 shilling each. The card had three panels. The outer two panels showed people caring for the poor and in the center panel was a family having a large Christmas dinner. Some people didn't like the card because it showed a child being given a glass of wine! About 1000 were printed and sold. The original cards were advertised with the slogan: "Just published, a Christmas Congratulations Card; or picture emblematical of old English festivity to perpetuate kind recollections between dear friends"!

Christmas Cards appeared in the United States of America in the late 1840s, but were very expensive and most people couldn't afford them. In 1875, Louis Prang, a printer who was originally from Germany but who had also worked on early cards in the UK, started mass producing cards so more people could afford to buy them. Mr Prang's first cards featured flowers, plants, and children. In 1915, John C. Hall and two of his brothers created Hallmark Cards, who are still one of the biggest card makers today!

Ever since Cam's first Christmas, we've sent Christmas cards every December.  We don't have any crafty artists in our family, but Jane creates a rhyming poem attempting to cover highlights of the entire year.  It truly ends up being a mini novel.

For the past 5 years, Holly and Ryan Gauper of Gauper Photo have taken our family pics.  We normally don't wait until this late date for our mini session.  On Sunday, we met up with Oma and Opa in downtown Muskegon to witness Holly and Ryan work their magic.  Somehow, everyone is smiling and they capture our crew.  It was an extremely chilly afternoon and the brisk wind left us all shivering.  Cam was a total trooper, though, and we all had a good laugh over the picture of his classic "I'm so done" face.  Everyone agreed we are targeting September next year. 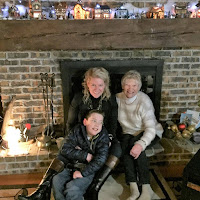 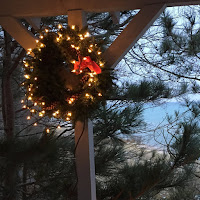 After photos, we headed to the cottage to pick up some things and Oma promised Cam some hot cocoa.  She didn't have any instant, so proceeded to make the homemade Hershey's hot chocolate on the stove.  Cam was so impressed!  He asked if he could have this kind every time:) 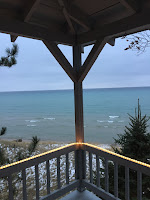 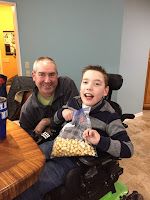 We arrived back in Grand Rapids in time for our annual Sunday dinner with the Raisch's.  An extra added treat was munching on the delicious homemade caramel corn made by Mr. Steve.  It truly is the most scrumptious we've ever tasted.  Thankfully, our kind Cam is open to sharing the sweet treat with the rest of us! 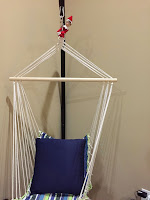 We began the Elf on the Shelf tradition many years ago.  This week the elf appeared once again.  Cam cannot wait every morning to see where the elf might be.  He was found hanging from a lamp, perched in the tree, holding onto a flashing light in the kitchen and on one particular morning, he was in the living room.  As Cam rounded the corner, he declared,
"First things first I need to find the elf.. well, I guess I'd better not go in my hammock today!"
Posted by Special Moms at 1:13 PM