Pizza with the Principal - Week of Dec. 17th 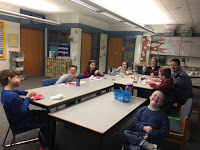 Last month, Cam received a high honor from his school.  He was nominated to have "Soup with the Superintendent" along with a small select group of others.  His awesome attitude and listening skills were the reason for the privilege, his teachers indicated.  However, on the day of the superintendent's visit, Cam was home sick with a stomach bug.  He took the news with maturity saying that maybe he would be able to go next year. 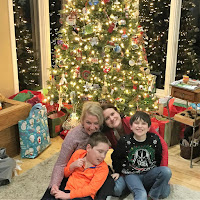 Chris and Jane talked about it and decided they would like to 'gift' a pizza party to Cam's small class.  After a few emails, Cam's teacher agreed it was a great idea and thought it would be fun to have the principal there too so it could be called "Pizza with the Principal!"  All of this was supposed to be a surprise, but little did we know the last week of school before break happened to be very popular for ordering pizza and delivery times could not be guaranteed.  Chris picked it up, drove it over and stayed for the delicious feast. 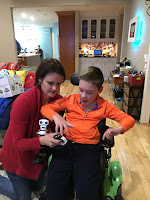 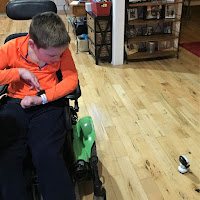 Christmas came early to the Weatherford family when Auntie Jo and Will came for dinner on Thursday.  After a chicken fajita feast, we opened gifts.  Cam's godmother found a small robot that her godson can control with two buttons on a wristband!  What a cool toy and using it solo is a huge bonus. 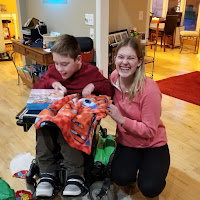 On Friday, Miss Amanda arrived after school with more Christmas gifts.  She gave her buddy the Candyland game (one of Jane's all-time favorites) and a Cars pillowcase to match his blanket she had made the year before.  He also received a Captain America sweatshirt.  Jane was given a beautiful neck scarf and bible verse in a handmade frame that one of her friends had painted.  Such heartfelt gifts from our sweet Amanda. 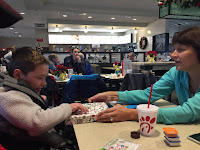 On the last day before holiday break, Cam was given something he didn't want- a stuffy nose!  It was a tough night of sleep, but we all rallied to meet Aunt Carol (Miss Amanda's Aunt, who is now Cam's adopted aunt) and Uncle Jim for lunch.  Early festivities continued for our meeting at Chick-Fil-A, a family favorite. 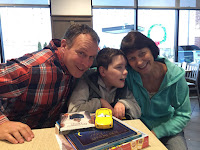 As Cam opened two books by Max Lucado, we were reminded of Papa Ken, as both of the stories help explain heaven.  Next Cam opened a game called "Guess Who" and he informed us he'd played it at school.  Chris and Jane had never seen it before, so they were happy Cam already knew all about it.  The movie "Secondhand Lions" was also opened and we look forward to watching it as a family.  Lastly, a laser remote-controlled car for Cam that he can work!  It's the character, Cruz, from the movie Cars3.

So many thanks for such awesome early gifts from all! 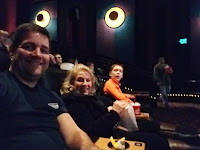 Sunday was a day of rest, but we decided to take in a movie since Auntie Jo and Will had given us movie passes.  Cam chose the new "Grinch" movie and noted that there were far too many previews before the show began.
We all gave the feature presentation a resounding thumbs up.  As we were headed out, our sweet son said "I want to thank them for showing that movie- it was really good!"


The Elf on the Shelf shenanigans were coming to an end, but this morning showing caused a big reaction from Cam:

"Hey, how is he going to stay hanging upside down all day?!  That is not healthy at all!"
Posted by Special Moms at 7:56 AM