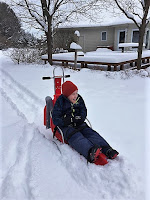 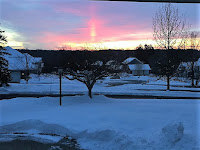 “People often say that motivation doesn’t last. Well, neither does bathing – that’s why we recommend it daily.” ~ Zig Ziglar

About this time of year, Michiganders start complaining about winter hanging around.  Typically the snow begins to melt a bit and then another round of the white stuff appears. 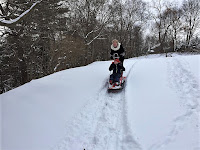 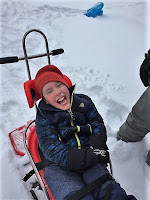 It may be chilly, but it does allow us to engage in some spectacular outdoor fun!  Last time we ventured out sledding, we braved the front yard hill and this time, Cam chose the backyard.  It was a long trek out there and the snow was a bit deeper than we expected.  The incline is just steep enough to make for a super fun ride, especially when Jane can hop on the back with her own 'mini' sled, with brake attached.
The most hilarious part of the day though, wasn't captured by picture or video.  Chris had inflated our sledding tube and when he arrived in the backyard, it didn't look quite blown up enough.  When we asked, Cam's dad indicated that he had to patch a small hole, but no worries.  Then, Chris took a running leap and landed on his stomach on the tube, which simultaneously 'popped' and collapsed underneath him.  The tiny hole that was patched had become a large opening that ran from one end of the tube to the other! 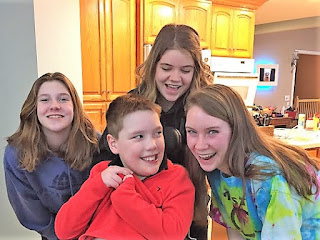 After quite a few sledding runs, we ventured over to Raisch's pushing/pulling Cam's sled with one parent in front and the other in back.  When we arrived at the Raisch family backyard, we were able to see some college girls playing broom-ball on their homemade ice rink!
The next evening, the Raisch girls (minus a sore throat Megan) arrived for dinner.  Anna was a special guest since she was on winter break from college.

Stella likes to hang around in the evenings, typically on her usual perch, the top of the couch. 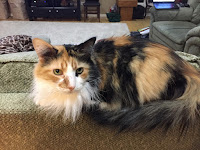 Our Sunday evening dinners with our Raisch buddies give us the motivation to look forward to the following week and leave any consequences from the previous week far behind.

Camology Quotes:
Cam is a happy kid.  However, make no mistake that he does find himself occasionally in trouble for not following a parental request.  On a school evening after he knew he was in trouble, he asked if he would have a consequence.  Cam's parents told him he would not have any time on his iPad after school the next day.  When Amanda arrived to watch him after school, she shared the following conversation they had...

I do not like the consequence.
Well then, you shouldn't do things that make you have a consequence.
(long pause) "I guess I will just need to listen to my parents."
Posted by Special Moms at 9:22 PM