"They invented hugs to let people know you love them without saying anything." ~Bil Keane

The origin of Valentine's Day is shrouded in mystery and many consider it a "Hallmark holiday" but in fact, there are some historical references.  Besides the martyrdom of saints, Valentine's is also thought to have originated from a Roman festival. The Romans had a festival called Lupercalia in the middle of February - officially the start of their springtime. It's thought that as part of the celebrations, boys drew names of girls from a box.

In Cam's 4th grade class at school, they drew names and were assigned a 'secret Valentine' for which they were asked to create and craft something based upon that person's favorite things.  It was a fun exercise and one the students were not allowed to spend more than two dollars on, a big bonus for parents!  Cam used a box to make a book of sorts filled with homemade bookmarks, plastic sport balls and candy for his friend, Moses.  Abbey had Cam's name and filled this cool water bottle with his favorite chocolates. 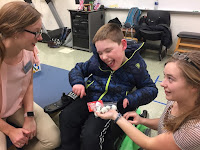 Since Valentine's fell on a Grand Valley day, Cam also picked up some goodies after showing Ms. Becca and Janae his gait trainer walking skills.  Ms. Janae made homemade oreo truffles with enough in the bag for each of us to have one.  Cam and his mom deemed them one the best desserts ever! 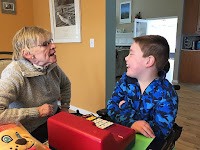 On Friday, Cam had a half day at school as a mini winter break.  Oma and Opa arrived in the afternoon to hang out with their grandson. 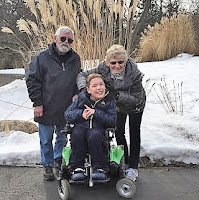 Cam and his grandma played different games and spent some time banking, determining the price of various items and tallying them up on the personal toy cash register.  We all dined on Chinese food Friday night and watched some Olympics.  And Oma shared with us that she actually attended the opening ceremony at the 1960 Olympics in Rome!  What a neat piece of trivia to learn about Cam's grandma.

On Saturday, the snow was starting to melt so we opted to skip sledding and made a pancake breakfast.
The time always goes by much too quickly when Oma and Opa visit.  We filled little bags with chocolates for them to take home, and they left us with full hearts. 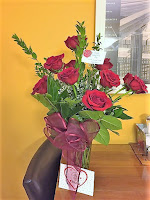 Camology Quotes:
The art of the romantic gesture is something Cam's dad excels at.  It seems he's already imparted this knowledge to his son.
Jane arrived home on Valentine's Day with Cam and Amanda after a Grand Valley session.  When she walked in the door, Chris wasn't home yet, but she found a beautiful bouquet on the kitchen counter.  The card read, "With much love, from your boys."

Oh my goodness, Cam.  These are those beautiful!
Thank you, Mom.  I told Dad to order them :)
Posted by Special Moms at 9:31 PM