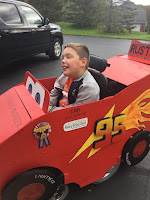 "Occasionally in life there are those moments of unutterable fulfillment which cannot be completely explained by those symbols called words. Their meanings can only be articulated by the inaudible language of the heart." ~ Martin Luther King, Jr. 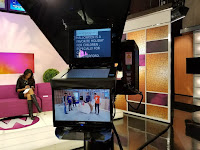 This was the week we had been waiting for, anticipating, working towards.  It just so happened that some other appointments made for an extra busy schedule.  On Tuesday morning, Cam had a powerchair "checkup" to be certain everything was in working order since he'd had some battery issues.  Everything passed inspection. 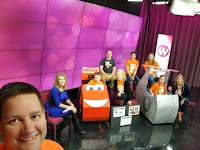 Early Wednesday, we were invited to a local tv program, eightWest, for an interview regarding our Halloween project with Mary Free Bed.  Chris transported two costumes to the station, Cam's and April's so Lightning McQueen and Skye from Paw Patrol could make an appearance.  This was the same place our son had been last year, so he knew exactly what to do.  During the segment, you'll notice Cam nod his head and slightly bump it on his costume.  When we asked him afterward what happened, he commented, "Mom, I was bored."  To which Chris replied, "Same things happens to me in meetings, Cam." 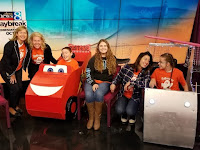 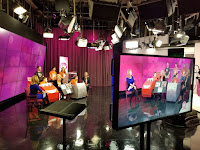 In our family, we have talked about all of these different volunteers who have come together to help with the Halloween For The Rest of Us project.  What began as an idea Molly Krauss had because of our Christmas card pictures, has turned into an event led by Mary Free Bed Guild members, Owen-Ames-Kimball construction company and Grand Valley State University Engineering and PT students.  Most often, people volunteer for something because of a connection to a cause, an effort, a program or person.  To see all of these people volunteer their time on multiple sunny Fridays and Saturdays (a rare occurrence in Michigan's fall weather) was unreal. 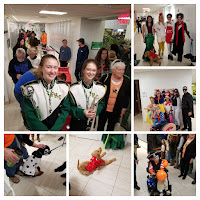 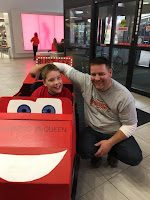 And it seems once people get involved, they want to stay involved.  Jake Stephens, a engineering student, volunteered with us last year and again this year for 3 entire days.  He not only constructed, but also designed, painted and embellished.  He told us he loves seeing the kids smile and made every effort to recruit fellow students.  The powered helicopter blade on April's Skye costume was created by three female engineering students determined to create the real deal for Miss April.  There were many moments during the creation of the costumes that made us all stand back as we watched the process take shape. 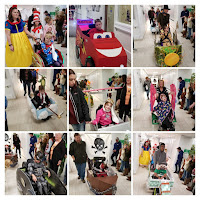 On Thursday, Cam had an appointment at MFB to pick up his new AFO's.  When we walked in, some Mary Free Bed employees actually recognized Cam from the tv show!  Friday was our last costume building day with 4 costumes on the schedule.  We recruited helpers last minute and Jane even picked up Cam due to a half day of school.  He was happy to lend his assistance and eat pizza for lunch just like all of our other volunteers. 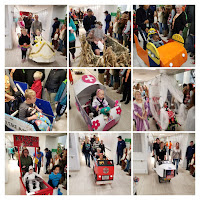 Saturday marked the official parade day!  The weather didn't cooperate and we had to enact the backup plan of stay indoors.  Originally, the intention was to be led by the Forest Hills Central Marching Band.  Since it was a bit difficult to bring a 100+member band into a rehabilitation hospital, the band director asked for a couple of volunteers to play quietly as the parade traversed the halls.  Even though we had never planned for 18 costumes to go up and down elevators, it all came together.  The 3rd and 4th floors were a part of our route and then the 5th floor requested a sighting as well. 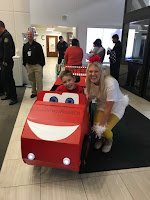 What struck us was that our 18 kiddos using power mobility or manual mobility were able to see adults in similar situations.  18 therapy dogs joined us too so there was a dog for every costume!  And the smiles...the smiles and laughter were everywhere!
And our Cam fans were out in full force too- Oma and Opa, Aunt Mary, Uncle Ray and their sons Tom and Mike along with spouses Sam and Cheri.  And the younger cousins, Harry and Ollie and Wendell were there to cheer on Lightning McQueen.  Cousins Coco and Libby as well as Cam's teacher Ms. Kathy and aide Nancy showed up too.  Patti, Emma, Sarah and Megan were right up front to see the lineup.  Ms. Amanda even wore a costume accompanied by her boyfriend Nick, his mom, Mary and sister Brooke.  Mary had a Lightning McQueen bucket full of things for one lucky boy! 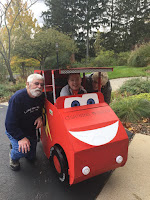 Oma and Opa spent the night with us and were a tremendous help keeping things in check and staying with Cam as the busy atmosphere was a little crazy at times.  We were most thankful for all of the support from our family, extended family and special friends.

Chris, Jane and Cam met Molly at Mary Free Bed on Sunday for final cleanup duty.  Jane was teary-eyed remembering every person, all of the activity and special moments that took place.  Cam was happy there was still some twizzlers left from our building fun.

One day, our son may realize the enormity of how his Halloween costumes which began 7 years ago, have started a tradition in our Grand Rapids community, one we hope will continue for many, many years to come.

Our ten-year-old is a compassionate soul.  During the building process, Jane created idea boards with Cam's help for each kiddo.  For Carson's board, his mom indicated her son couldn't have anything on his head.  On parade day, with the planning changed to indoors, there were many questions from Cam.

"Mom, will the band still play inside?"
Just a few people are going to play, I think.
"What if it is too loud?"
Well, you could wear headphones.
"But Carson can't wear headphones, Mom, he can't have anything on his head."
Posted by Special Moms at 7:59 AM