Disclaimer: Blog 1 of 2: Two blog entries this week because there is too much to share!

"Life's most persistent and urgent question is, What are you doing for others?" - Martin Luther King Jr.

Through a series of events, we made a connection with the Wyoming Police Department, thanks to our relatives, the Cornell family.  Cam's parents decided it would be an awesome surprise to take their birthday boy to a police station on his special day.  The plan was set up with a Captain at the department...what is that saying?  Go big or go home! 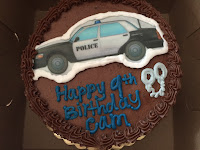 On Wednesday, Aug. 17th at 1:30p, Cam only knew he was heading out in the van for a birthday event, but had no idea what it was.  Michelle filmed this sweet video of our arrival on location.

Upon entrance, it seemed as if the entire building knew Cam's name and reason for being there. 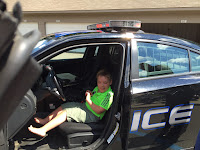 We were escorted into a conference room with a Birthday sign on a board at the entry.  Awaiting us was a chocolate birthday cake and cupcakes from Marge's Donut Den along with quite a few deputies.  Captain Kim Koster introduced each officer and detective and explained what they do.  Officer Toonstra and his K-9 partner, Dutch, demonstrated a few tricks.  This dog
also showed off his sweet side by giving Cam some kisses.


Officer Allen then led us on our official tour- first we ventured outside in the back of the building where Cam had a front seat
viewing in the squad car.  The officer explained all of the lights, buttons, radar and computer screen to the young recruit.  It was a surprise to us all to see the small printer for printing tickets (how would Cam's parents know about that?!) right inside the police car as well as a secret gun strategically placed.
Next up was the police motorcycle and even though Cam has grown quite a bit, he looked small in stature on the big bike.

Our tour guide led us through the S.W.A.T. (Special Weapons and Tactics) room and then to the holding cells which Cam deemed quite small.  Officer Allen took us to the 2nd floor where the offices are and we met more personnel, including detectives.  As one of our final stops, we even saw the office of the Chief of Police- wow!

Lastly, Captain Koster thought Cam might want to bring some treats to the officers during their briefing, which takes place every afternoon.  Everyone we saw in the building gave Cam a "Happy Birthday!" greeting.
As we were getting ready to leave, Ms. Tara gave us a cd of all of the pictures she had taken during our stay! 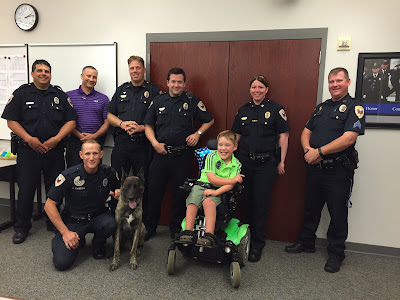 To say we were overwhelmed by this experience is just simply an understatement.  We were surrounded by a community of officers who felt like friends by the time we left. 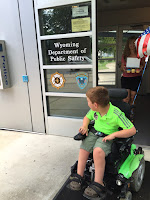 Cam was given quite a few special souvenirs.  One of his favorites is a special engraved coin that all officers are given after being inducted into the department.  The words ingrained are: "This is my SHIELD.  I bear it before me into battle.  But it is not mine alone.  It protects my brothers and sisters on my left and right it protects my city. I will never let my brothers or sisters out of its shadow, nor my city out of its shelter. I will proudly carry my shield before me, with honor."

Thanks are not enough for the Wyoming Police Department.  We cannot wait to see you all again! 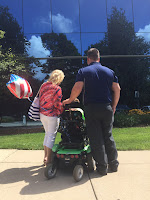 Camology Quotes:
A repeated conversation that took place at least 10 times the day of Cam's birthday...

Keep up the good work , I read few posts on this web site and I conceive that your blog is very interesting and has sets of fantastic information. electric vehicles

Isn’t it entertaining if we always talk about topics like that..:*`, best retractable tonneau cover

You can certainly see your enthusiasm within the work you write. The sector hopes for even more passionate writers like you who aren’t afraid to say how they believe. At all times follow your heart. 토토사이트