Travel, a Test and Tenacity - Week of May 9th

The most difficult thing is the decision to act, the rest is merely tenacity. The fears are paper tigers. You can do anything you decide to do. You can act to change and control your life; and the procedure, the process is its own reward. ~Amelia Earhart

Plans change sometimes.  What was the intended schedule veers in a different direction.  Such was the case with Jane's travel for work.  She was in Texas Monday and Tuesday, flew back late in the evening and left for New York Wednesday morning, returning Thursday night.  The boys had some quality time together.  With the weather shaping up a bit, they created an outdoor fort with lawn sticks to traverse through and hang out in.

While Jane was in the Lone Star state, she noted on the weather forecast there was a very familiar city name- can you spot it?

On Friday, Cam had the day off of school.  We had scheduled an intrathecal baclofen test for him at the hospital to determine if a future procedure may enable him to gain more mobility.  We arrived early amid many questions such as..but not limited to.. "Did you call base (aka bussing)?  Did you call my school to let them know I will not be there today?  Does the hospital know we are coming?  Where will be park?  Will we eat dinner there?" 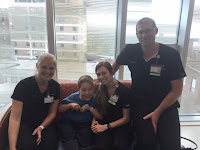 The procedure itself only took 15 minutes or so while Cam was under sedation, but we were required to stay until after 5p to be certain Cam was alright and to have him assessed throughout the day.  Our PT friends, Marlie, Kayla and Jason hung out with us for a good portion of the day.  Jason actually remembered Cam being in the hospital after he was born and he cared for him during his stay in the NICU unit!  Pictured behind our new buddies is a building where the aero med helicopter lands on top, which provided a nice distraction throughout the day.  We were relieved that Cam could stay in his own clothes for the short operation and recovery.  He even acquired a new pair of shades from the PT crew! 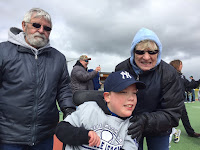 As parents, we never want to push too far, but we also want Cam to understand the honor of commitments made.  Much to our surprise, he wanted to play baseball on the coldest Saturday of spring.  At the last minute, he thought about changing his mind, but after we talked through it, he opted to continue on.  And in those moments, Cam is learning and persevering and remembering. 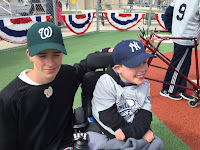 Oma and Opa braved the weather for baseball as well and arrived with blankets in hand as Jane passed out hot cocoa.  Cam suggested afterwards we head to "Olive Garden" for lunch because "it is a close place for Oma and Opa."  So sweet of him to think of his grandparents, and potentially his own stomach as he promptly requested breadsticks upon entrance.
A ballfield full of thanks to Cam's grandma and grandpa for making the trek and surviving the blustery day. 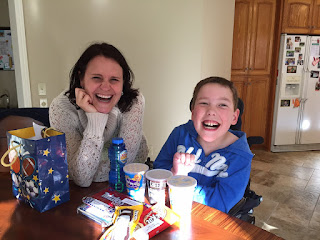 The cold day and possibly leftover hospital time left Cam a bit out of sorts the rest of the weekend.  Sunday afternoon, Chris and Mr. Steve took Cam over to Cabela's to grab some fishing gear for an upcoming fisherman's weekend.
By the time Cam arrived home, he was greeted by 'Auntie' Jo complete with a care package for her godson.  She also brought a sweet bouquet of flowers and a pic of Jane and her godson, Will.

Somehow Auntie Jo knew what would perk up Cam with a bag full of sweet treats ranging from animal crackers and mini oreos to king size candy bars, all with encouraging notations!  See if you can guess which quote matches which sweet treat! (and many thanks Auntie Jo!)
"Don't Snicker but we think you are the greatest!"  "The 3 Musketeers- Chris, Jane and Cam"  "You are one cool Kat!" "You are Marvelous and Magnificent!"
Cam-ology   Quotes:
At the WMML baseball game, Cam's helper was named Jason.
"Mom- that is a lot of Jason's.  Jason at the hospital yesterday and Jason today.  And there is a Jason who bought our old house!"
Posted by Special Moms at 2:21 PM