What a difference a week makes!  Trees and flowers are budding everywhere and the warm weather has helped everything move along in the course of blooming.

The weekend brought 'Auntie' Karen all the way from the Chicago area ready to take in a baseball game on Saturday.

It was such a sunny day on the ball field!  The Rockford baseball team was on deck to volunteer and Cam's buddy this week was Wyatt. 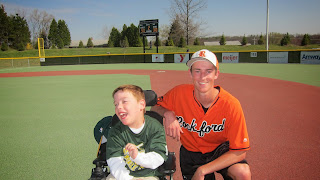 Two family fans appeared as well- Aunt Mary and Uncle Ray!  Each time Cam saw Uncle Ray with his camera, he flashed a winning smile- many thanks to them both for making it to the game!

After Cam's team played, there was a big event.  At 11am, the new accessible playground had its Grand Opening and Cam couldn't wait to test it out.  All children, regardless of ability, will be able to enjoy this playground.  During the various speeches, Cam asked Jane (more than a few times) "is it over?"  The speeches were great, but our baseball player had an agenda. 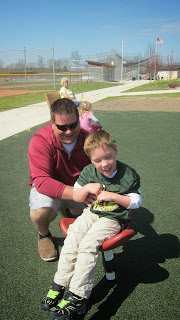 One of Cam's classmates, Brody, is also on a team for the WMML.  The boys spotted each other on the playground and were pretty excited to explore the place outside of school.

Cam liked the toadstools where one could sit and spin around.  There were slides, tunnels, and a swaying bench where everyone could be rocked back and forth.

The West Michigan Miracle League even brought in a clown for the event.  He was quiet and funny as well as a great juggler.  Shown here, he's a little stuck in between some bars and the kids couldn't stop laughing about his antics.

Back at home, Auntie Karen and Cam had a sitting contest while being timed.  Karen brought a dice game called Farkle along with some seeds for Cam to plant in the yard and watch grow.  She also kicked off the flower season with a beautiful hanging basket.  Many, many thanks to Karen for spending so much time with us by giving the most precious gift of all- her time. 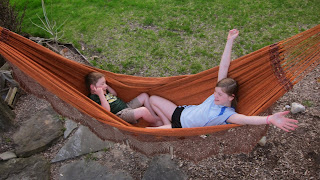 After so much activity, it sure is nice to relax in the backyard with a best friend in the hammock!!
Posted by Special Moms at 11:56 AM