There is a saying...."The common cold, if left untreated, lasts about two weeks. If treated with 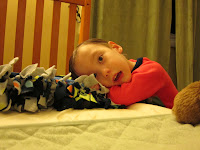 medication and rest, it lasts about fourteen days." In Cameron's case, it seems to 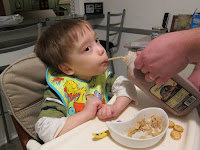 have come and gone for a few weeks.
Chris and Jane have been following standard protocol, making certain that their son is drinking plenty of liquids!
Cam has had to a 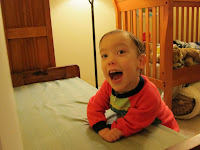 dapt to many different things and a conversion of his bedroom was no exception. In late December, his room transformed to a big boy bed, dresser and 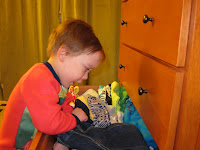 blanket chest. Cameron is shown here standing in front of the chest where he gets dressed.
He does like to pick out his own clothes, but sometimes needs a little assistance matching the outfit...thanks to his Mom! 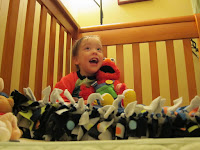 Cam's bed contains many of his favorite animals, including Elmo. The cozy blanket was made by his 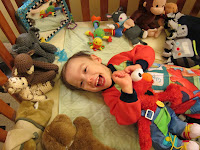 godmother, 'Auntie' Jo and it is the cuddliest covering ever.
Although Cameron's parents were a little apprehensive about him adjusting to the new sleeping arrangements, Cam handled it like a champ. The only surprise one morning was finding the big boy standing at the side of his bed, still sleeping with his head on the mattress. Some mornings, it's tough to get out of bed...well, actually, all the way out of bed, in Cam's case...
Posted by Chris Weatherford at 11:41 PM

Hey, I am checking this blog using the phone and this appears to be kind of odd. Thought you'd wish to know. This is a great write-up nevertheless, did not mess that up.