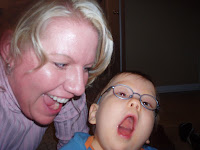 Cameron's week began with a trip to his doctor's office Monday eve for the annual flu shot. Chris & Jane sat amongst many other parents to await their turn. When Cameron was called in, and the shot was given, he only let out a small cry and quickly recovered. What a brave boy!

Cam had a taste of Jane's lasagna and some mac n' cheese this week and it's very obvious that the growing boy likes pasta! Just to be sure his parents chose some yummy food, he accompanied Chris & Jane on a trip to Meijers and sat in the child seat for the first time! 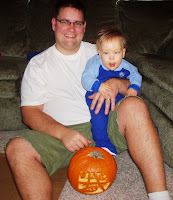 When Chris put some sweet potatoes in a plastic bag, Cam thought he needed one too.
Cameron decided to help out his Dad with the pumpkin carving, but he was really most interested in getting that pumpkin to fit in his mouth. 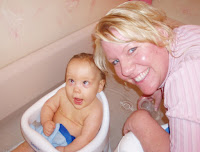 He must think it's a giant sweet potato or squash, since those are a couple of his favorites.
Speaking of favorites, bathtime is definitely one of Cam's. He loves to be in the bathtub and it's the best way to end a great week! Before going to bed, Cam wants everyone to know he's rooting for his Uncle Joe's favorite team - Go Phillies!!
Posted by Chris Weatherford at 10:31 PM