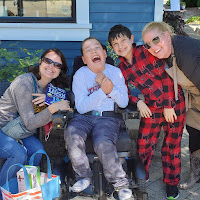 Did you ever wonder where the term hot dog came from?
Some say the word was coined in 1901 at the New York Polo Grounds on a cold April day. Vendors were hawking hot dogs from portable hot water tanks shouting "They're red hot! Get your dachshund sausages while they're red hot!" A New York Journal sports cartoonist, Tad Dorgan, observed the scene and hastily drew a cartoon of barking dachshund sausages nestled warmly in rolls. Not sure how to spell "dachshund" he simply wrote "hot dog!" The cartoon is said to have been a sensation, thus coining the term "hot dog." However, historians have been unable to find this cartoon, despite Dorgan's enormous body of work and his popularity. We think Mr. Dorgan would have loved Brody's be Dogs.
Now, our favorite café is serving up hot and steamy dogs via their outdoor hot dog cart. Customers have a choice of chili, cheese and all of the fixings. Cam had his first taste on Saturday and declared it the best hot dog ever! Jane offered to help serve up the lunch baskets to learn the setup and assist when needed. Auntie Jo and Will love hot dogs too and since the boys hadn't seen each other in quite some time, a belated birthday celebration was in order. 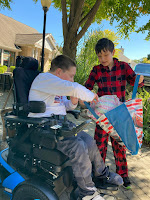 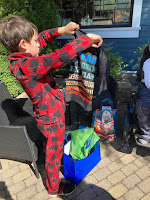 On the afternoon filled with sunshine, the two boys had lots of laughs as they opened each other's gifts. Cam received a cool lava lamp and joke book made especially for 13-year-old's. Will looked in his bag to find a soft travel pillow, 12-year-old t-shirt and a gift card that could only be removed by completing a puzzle. And in less than two minutes, the gift card was his! We also had fun saying hi to friends from Lowell who have worked on our Halloween Heroes project since the beginning 5 years ago.
This week we made the difficult decision to officially cancel our Halloween Heroes project for 2020. It is the first time in 5 years we will not be dreaming of wheelchair costume designs 24/7. It is our family assignment and one that began because of Cam's desire to have a costume just like every other kid 8 years ago.  Jane wrote the following announcement to share with the community. 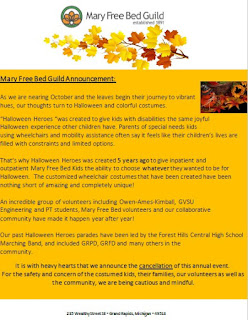 Although Cam won't be leading the annual parade at Mary Free Bed this year, we will be leading our friends to Brody's be Café as much as possible! 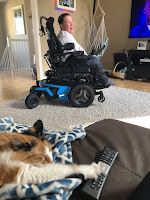 Camology Quotes:
Stella made us laugh this week when it looked like she was trying to change the tv channel while asleep!  On Wednesday, Cam was scheduled for a virtual learning day. Tuesday after school, Cam was telling Jane about his bus ride home…and she was silently questioning her son’s logic.
"Dom told me his is going to finish all of his homework tonight so he can sleep in. I will just wake up early tomorrow."
Posted by Special Moms at 9:55 PM

Hi!
I've read your messages to Blogger Community https://support.google.com/blogger/thread/71792824
To solve your problem,
just see the HTML code of one of your previous posts,
find the lines like
imageanchor="1" style="clear: left; float: left; margin-bottom: 1em; margin-right: 1em;"
then save it as .txt for your future ref.
You can use those tags to edit your new posts @HTML mode.
It's easier and works @any HTML editors :)