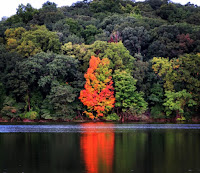 "How wonderful it is that nobody need wait a single moment before starting to improve the world."
~Anne Frank
Words are powerful.  Depending on the type of phrase and how it is used, different emotions follow.  Often, little kids don't necessarily know if a word or phrase is generally considered blasphemous, obscene, vulgar, or otherwise offensive.  As Cam has gotten older, he has always been cautious with his use of words and their context.  It was a bit surprising, to his parents, when he began saying that he heard "bad words" watching appropriate shows and online videos.  It turns out, "bad words" to Cam include the following:
Hate, Stupid, Dumb.  Imagine if everyone treated those as 'inappropriate' words to use so casually, as we all (Cam's parents included!) tend to do. 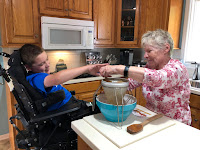 This week, Cam's grandparents stayed at our home following an outpatient eye surgery for Oma.  It is always a treat to have them with us and even though Oma had to take it easy, she was still able to squeeze in making applesauce with her grandson.  Homemade applesauce is all about the tools of the trade.  A stand-up colander with a wood pestle is a requirement, according to Oma.  The pestle allows you to easily squish (technical term) all of the yummy sauce through the colander into the bowl.  Depending on the type of apple used, very little sugar may need to be added.  All that's required is cutting apples and removing the core.  No peeling or any other effort is needed. 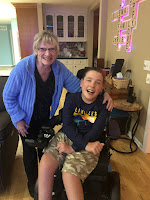 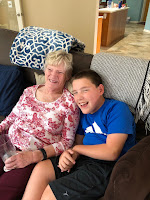 Since Wednesday was a virtual school day this week, Cam was scheduled for his flu shot, a class zoom meeting, homework and time with Oma and Opa.
He successfully completed all four activities and even got in his tutoring session with Ms. Ann.
In a rare moment, Cam requested couch time with Oma to watch a movie.  It was super sweet to see them laughing and chatting about the film feature.
We said goodbye to Cam's grandparents and decided we were equally thankful for each other's company and sharing dinners and time together. 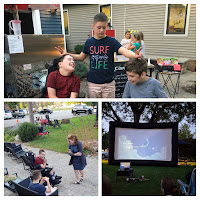 Friday evening included a family outing to Brody's be Café.
Jane was scheduled to help out with the hot dog cart while Chris and his son were on duty to set up an enormous movie screen and projector.  The event included a screening of "The Bee Movie" and popcorn as well as a choice of candy.
The large inflatable screen was huge!  After a few technical difficulties, the projector and the fifth laptop attempted connection finally worked.
We saw so many people we knew!  Even Cam and Brody's teacher, Mrs. Wells, brought her entire family to say hi and socially distance with her students.  With all of the week's activities including school, we were shocked that Cam made it through the entire movie and didn't get home until after 10pm.  Even after a late night, though, our early riser still woke up before 8am ready for the day and to start working on projects!  His parents, however, definitely thought at least two more hours of sleep were in order. 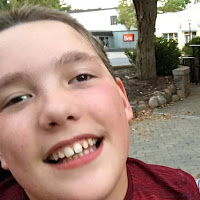 Camology Quotes:
Cam is already learning the finer traits of complimentary phrases.
Jane was answering questions that her son was asking about the day his parents were married and when they were dating.  His response after all of the information gathering...
"I see why Dad chose you for his wife.  You are so beautiful."
Posted by Special Moms at 5:45 PM