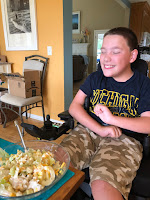 "I have the simplest tastes.  I am always satisfied with the best." ~Oscar Wilde

"Who has never tasted what is bitter does not know what is sweet." ~German Proverb 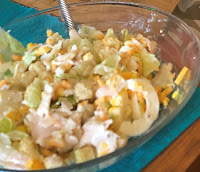 Cam is willing to try almost anything at least once, as it relates to food.  It's funny how his preferences have changed over the years.  Maybe that's because of this fun fact.
The average person has about 10,000 taste buds and they're replaced every 2 weeks or so. But as a person ages, some of those taste cells don't get replaced. An older person may only have 5,000 working taste buds. That's why certain foods may taste stronger to you as a kid than they do to adults.
We shouldn't have been surprised when Cam requested a salad for lunch, but we actually were.  The caveat here, though, is that Cam's mom makes a salad comprised of the following: hard boiled egg, shredded cheese, sweet corn (cut off the cob) turkey or ham, tasty croutons, ranch dressing, and yes, a bit of lettuce.  He devoured his mid-day meal and declared it the best salad ever!  A very nice compliment from someone who has never had a salad before...😀 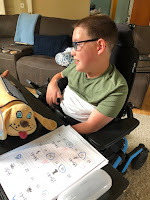 With Cam back in school, we weren't certain he would want to continue tutoring or if he would be too worn out after a day of learning.  He requested continuation, so he and Ms. Ann meet virtually on Zoom three afternoons a week.  They typically work on math and reading comprehension for 90 minutes.  The diligence has paid off- this week Cam's school folder contained his perfect score math sheets. 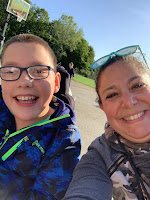 Chris continues his after hours job as Cam's personal barber, cutting his hair with clipping shears outside.  Jane declared there was enough hair chopped off to make a bird's nest.  Cam thought that was rather "gross" that birds would use his hair to sleep on.

At school, our 7th grader was able to see a favorite aide from last year, Mrs. Festian.  They met outside and Cam was super excited to see her. 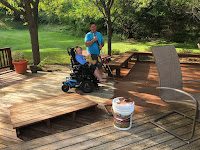 The weekend saw the completion of a big father/son project.  The duo spent a great deal of time power washing the back deck in preparation for re-staining.  The double coat of stain made the older wood look brand new.  It's always a sense of satisfaction to cross a time-consuming task off the list. 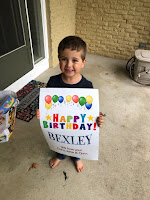 Cam also helped Jane create a poster for their buddy, Bexley, in honor of his 4th birthday.  According to his mom, Katherine (who is also Cam's former nanny), Bexley was very curious how the poster was made.  Even though a drive-by birthday isn't the same as an in-person one, it does bring out the creativity to find a way to produce more smiles.
Generating smiles is something Cam mastered a long time ago!

We have noticed an increase in Cam's appetite which has coincided with his growth.  He is very perceptive and usually detects when something is different.  After Jane gave him his plate of food for dinner one night, his response was telling.
"Mom, that's a generous helping!"
Posted by Special Moms at 5:40 PM