“Unplugging for a while fixes computers and humans” ~Freequill

A chance encounter is the unknown and unpredictable element that causes an event to result in a certain way rather than another. 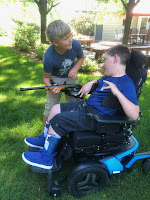 When stopping at Starbucks (Jane's guilty pleasure), we saw our neighbors parked right next to us.  After chatting for a bit, Thad, who is closest in age to Cam asked if he would like to see his air gun.  When we arrived home, Thad came over soon after and explained the safety and usage.  He even made a target for Cam to practice on.  Since it was an air gun, it was very quiet which Cam thought was especially cool.

A trip over to Brody Be's during the week included a meet up with some GV graduate students and their puppy named Kobe.  It was nice hanging out in the shade and chatting.  The small dog was super cute but barked a bit too much for Cam's liking. 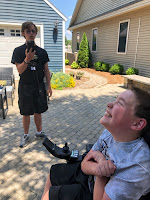 After the GV guys left, we had a special treat.
One of the Be-rista's at the cafe loves singing Elvis songs.  Liam treated us to a mini concert outside and we were all very impressed.  It turns out Elvis recorded more than 600 songs and Liam's mom told us that her son knows at least 300 of them- wow! 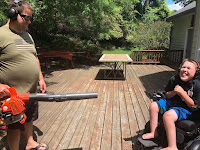 Cam and his dad spent some time outdoors during the week working on the deck.  It's pretty fun when the leaf blower doubles as a cooling fan on a hot day. 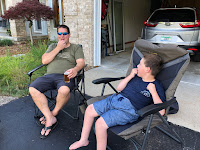 Friday, we celebrated Chris for his birthday!  Beginning with breakfast and picking out one of his favorite spots for takeout, Cam led the way with ideas.
Presents for the best guy were a new set of camping chairs- one from Oma and Opa and one from Cam and his mom, along with some t-shirts and shorts.  The comfy chairs had to be tested out after dinner.  Chris proclaimed they were just right for chillaxing! 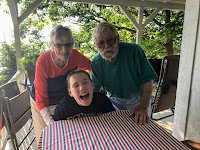 At the cottage, Cam takes pride in saying a family blessing before eating.  Each one is unique and oh so truthful!
"Everyone stay safe.  Thank you for the beautiful day.  Thank you Oma and Opa for letting us stay for dinner even though it was not planned.  Amen."
Posted by Special Moms at 10:06 AM