"Every human has four endowments - self awareness, conscience, independent will and creative imagination. These give us the ultimate human freedom... The power to choose, to respond, to change." ~Stephen Covey

The definition of independence is freedom from the control or influence of others.
Being independent means different things to different people.  For Cam, the power wheelchair allows him to freely choose a direction, a path, a course.  Without it, he is reliant on others.  With it, he decides where he will physically go next. In our world's continued state of health concerns, all local fireworks shows and parades were canceled this week.  For Cam, this was a bit of a relief since the big celebrations are quite booming near our home.  However, it seemed that privately, people in our area took on the role of trying to outdo one other with the loudest light show for four nights in a row.  Actually, our son made it through, thanks to blue-tooth headphones streaming music from his dad and check-ins from both parents.  At one point, we heard him repeating the word "furious" over and over when the loud pops wouldn't stop.
Thankfully, there were plenty of distractions during the day. 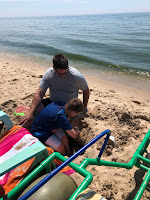 Ms. Amanda introduced us to Amish Friendship Bread a few weeks ago.  She gave us a "starter" that contains ingredients you keep mushing around in a bag for 10 days and then bake.  The recipe makes two large loaves of bread and 4 "starters" to give to others.  The bread reminds us of Oma's cinnamon coffee cake.  Cam thinks it is best for breakfast or a snack. 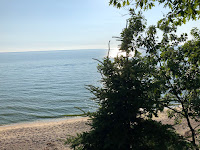 On Saturday, we headed north to the cottage where Lake Michigan was unusually calm and the beach looked very inviting.  Digging large holes and cooling our feet took up quite a bit of time.  All that sand was rinsed off in the big lake. 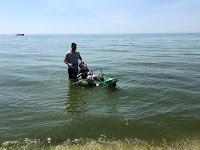 The CamMobile still ranks as one of the most ingenious creations Chris has made and improved upon every time he has had to re-build due to Cam's growth.
After a solid few hours of playing, catching up with cousins and soaking up the sun, we headed up to Oma and Opa's.  We all ate on the deck with Lake Michigan in sight.  For dessert, each of us enjoyed an ice cream sundae which always seems to taste better consumed in the summer and outside. 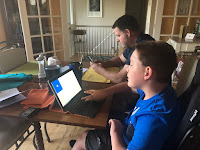 Sunday was our catch up day for household chores and complete outstanding projects. 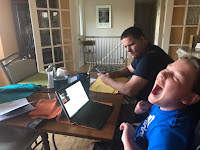 Cam told his dad he wanted to play on his computer for awhile.  Turns out our son may be picking up a few too many tips and tricks as he fearlessly navigates the keys and icons.  Before Chris knew it, Cam had changed his profile picture for work.  It definitely seems the technology gene runs deep in our family!

Cam truly has an internal clock.  Without knowing the actual time, his predictions for eating meals are always spot on.  When asked, "Are you ready for dinner?  His immediate response:
"I was born ready!""
Posted by Special Moms at 8:00 PM