All About Applesauce - Week of Jan. 27th 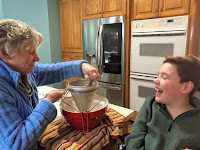 “Let food be thy medicine and medicine be thy food.” ~Hippocrates

Is there a food that reminds you of childhood?  A homemade treat that makes you smile? 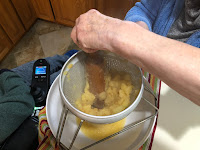 Homemade applesauce has been a staple in our household since before Cam was born.  The funny thing about only having a made-from-scratch certain kind of something is that trying to purchase elsewhere pales in comparison.  Store-bought applesauce has never been on our grocery list and at least in Jane's mind, it never will be. 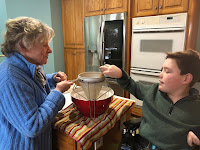 Oma and Cam had making sauce time this week.
Oma and Opa arrived late Thursday after an outpatient eye surgery for Cam's grandma.  The school day was cut short for Cam on Thursday due to him coughing and not feeling the greatest.  So although extra time for grandma/grandson wasn't pre-planned, it certainly was a blessing for our family. 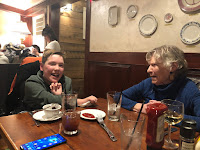 Saturday was Opa's birthday and we realized that we had not all been together on the actual day before to celebrate.  Everyone felt well enough to go out to dinner to Cascade Roadhouse, right around the corner. 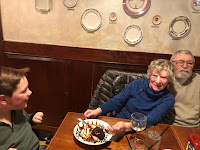 Even though it was a longer than normal wait, we were all impressed that Cam kept his cool and didn't complain one bit.  Sometimes the waiting makes the food taste even better.   Our delicious dinners were accompanied by a chocolate lava cake with ice cream and strawberries that we all shared.  Opa told us it was one of his best birthdays ever!  Mission accomplished. 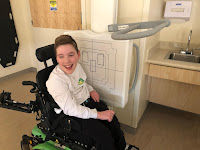 Sunday morning, Jane and her son headed to the med center to be certain Cam's cough wasn't something more serious.  The doctor ordered some x-rays and Cam made quite an impression on the radiologist.  The technician told our son that if he could keep that positive outlook and attitude in life, there was nothing he couldn't do!
And in fact, his parents couldn't agree more... 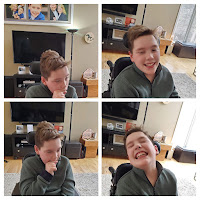 Camology Quotes:
Cam loves jokes, even bad ones.  Those seem to create the loudest belly laugh for him.  The latest entry from our twelve-year-old was told to him by his buddy, Liam.
"Are you going to look for that under there?"
Under where, Cam?
"Mom, I made you say underwear!"
Posted by Special Moms at 4:46 PM