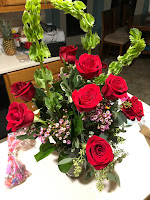 "Loving is not just looking at each other, it’s looking in the same direction." ~Antoine de Saint-Exupéry
"They invented hugs to let people know you love them without saying anything." ~Bil Keane

When Cam was younger, the week of Valentine's Day was filled with preparing what to pass out to his classmates.  The ever popular card with a sugary treat was favored by most.  Our family favorites were always the handmade ones.  For quite a few years, we opted for creating bookmarks or coupons.

It seems our son definitely prefers the 'older kid' activities of the 5/6 building.
Before Friday, though, a field trip to pick up the half cow we ordered was on the list.  Ms. Ann now lives right next to a farm and we decided to split a cow between Ms. Ann's family and ours.  Chris and Cam headed over to Byron Center on Tuesday evening.  However, the large but not deep boxes made for a hilarious return trip as meat began to scatter everywhere in the back of the van. 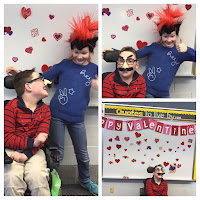 At school this week, the room was decorated and the kids took some funny pictures.  The Northern Trails 5/6 building began a tradition of bowling for Valentine's Day quite a few years ago.  Cam thinks it far exceeds the card exchange of grades past.
Both 5th and 6th graders end up at one of two bowling alleys for a couple of hours to enjoy an outing with their friends.

Saturday eve became our Raisch dinner time.  We feasted on Thanksgiving in February by cooking a boneless turkey breast, homemade stuffing, mashed potatoes and veggies.  At dinner, Patti was telling us about an article she read announcing the opening of a new place- Bro's Doughs on the East Beltline.  We were intrigued, so Patti, Jane, Emma and Cam all trekked over after dinner to check it out. 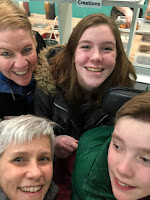 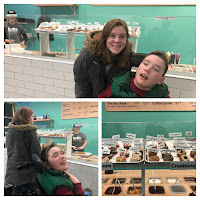 At Bro's Doughs, they think there's nothing wrong with pre-made doughnuts, but their establishment believes in a better way to doughnut. And that "way" is one made before your eyes - quick, fun, and mini! As you come in the door, they fry your mini doughnuts right in front of you and top them while they're still warm. There are 50 flavor options to choose from!
The toughest decision was deciding which creation to pick.  Both families gave a resounding thumbs up and our recommendation to try it for yourselves. 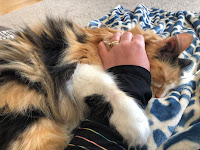 It's funny how love can be shown in so many ways- a small gesture, kind words, a helping hand. Even animals have their own way of showing us love.
A hug can be more powerful than the words "I love you" and a twelve year old who still asks for hugs is one of the greatest Valentine gifts of all.

Camology Quotes:
Story update:  Thanks to Cam's tenacity and ability to keep his parents focused on a goal, we received our replacement gift card in the mail this week from a package that was lost at Christmas!

Jane was discussing the high school sweetheart dance while Cam was listening...
"How do you do the dance, Mom?"
I'm not sure what you mean, Cam.  It's a dance you go to with other people.
"Ohhhh.  I thought you had a to learn a certain dance called the Sweetheart Dance just to go there!"
Posted by Special Moms at 10:06 AM