"The time is always right to do what is right." ~Martin Luther King Jr. "Gratitude is riches. Complaint is poverty." ~Doris Day

Jane's grandma was born in 1906 and lived to be 99 years old.  She passed before Cam entered this world and we often talk about how much fun the two of them would've had.  When Jane first showed her grandmother a digital camera and how it worked she declared it seemed "like magic" to her.  As our technology continues to advance, we are grateful for its ability to make one seem right around the corner instead of over a thousand miles away. 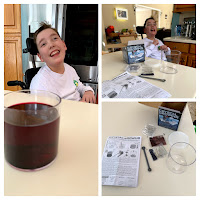 On Monday, Cam and Chris said goodbye to Jane.  She was flying to Salt Lake City, Utah for her work and not returning until very late Friday evening.  Since there was no school due to MLK Jr. Day, Ms. Ann arrived to spend the afternoon with her buddy.  They kept themselves busy with homework and a scientific crystal growing kit that Ann had given Cam for Christmas. 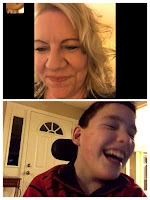 Jane and her son connected every day via face-time to talk about the day and what had happened.  It definitely gives that feeling of not being so far away from each other.

Back in Grand Rapids, Chris fulfilled his 'best dad ever' role.  One evening, he created a "homemade Moe's dinner" - a favorite take out place of Cam's.  He even wrapped it in foil to make it appear authentic.
The boys worked on a frame for one of our Ansel Adams pictures and a few other home projects, including laundry and dishes.
Jane was very impressed and declared Cam's dad 'best husband ever' too!  And apparently, our son was a pretty good kid during the week as well. 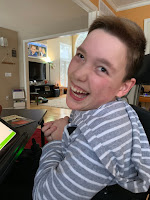 Our weekend agenda included relaxation and the most important part...plenty of hugs that were missed during the week!

Camology Quotes:
A favorite breakfast of Cam's is a homemade biscuit egg and bacon sandwich.  Always being the kind kid he is, Cam was willing to share.
"Do you want a biscuit, Mom?"
No thank you, Cam.
"Oh, you're not a biscuit kind of girl?"
Posted by Special Moms at 2:35 PM