The "why" questions still continue for Cam and in reality, we all continue to question things even as we grow older.  As a family, we got to wondering where the tradition of having Thanksgiving on the 4th Thursday came from.  We found the answer in an article from NPR...
In 1789, President George Washington declared Thursday, Nov. 26, as a "Day of Publick Thanksgivin," according to the National Archives. But in the years following, the date for the holiday was announced by presidential proclamation and was celebrated on various days and in different months.
When President Abraham Lincoln made his Thanksgiving proclamation in 1863, the last Thursday of November became standard. Then came the big date dispute of 1939, when two Thanksgiving holidays were observed. You see, according to the Franklin D. Roosevelt Presidential Library and Museum, a five-Thursday November fell in 1933, and some retailers asked President Roosevelt to move the holiday to a week earlier. The president denied the request, and Americans ate their turkey on the last Thursday as always in 1933. But Roosevelt was president for a long time, long enough for another five-Thursday November to roll around in 1939. Once again, some business leaders asked if the date for the holiday could be a week earlier to give people more time to shop for Christmas, and this time Roosevelt agreed to do it. This raised a hue and cry as many people felt that he was catering to large retailers so they could make more money.
Sixteen governors decided their states would have Thanksgiving on the last Thursday of the month as usual, and that's how some people ended up celebrating it a week earlier or later than others — for two years. Roosevelt stuck with the second-to-last-Thursday schedule, some states stuck with the last-Thursday-of-the-month schedule and finally on Dec. 26, 1941, Congress passed a law making Thanksgiving the fourth Thursday of November. 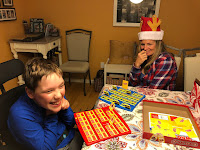 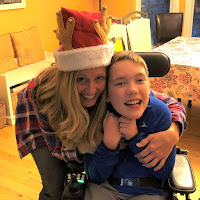 This week, we were extra thankful for so many reasons.  On Tuesday, Ms. Michelle, a former nanny of Cam's, surprised us with a visit!  She lives in Florida now and was in Michigan for a short time.  Jane set up the date but wanted Cam to be completely unaware. 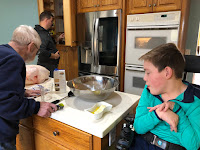 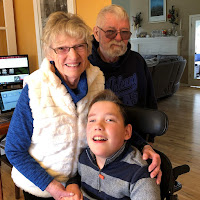 He could not believe his eyes when she popped around the corner!  She told us about her mission trip to Guatemala and had some festive Christmas lights for Cam to wear and a thankful chalkboard.  Ms. Michelle stayed for dinner and asked Cam if they could play one of his favorite games.  He chose "Guess Who" and they played quite a few rounds.
On Wednesday afternoon, Oma and Opa arrived to spend two nights with us. We are always grateful to have them with us for the holiday.  Always ready for a project, Cam and his helpers, Jane and Oma, decorated the Christmas tree. 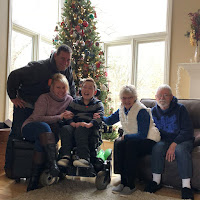 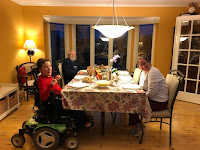 Later in the morning on Thursday, Opa and Cam prepped the turkey with homemade stuffing and Jane and her mom headed over to Starbucks to grab coffee for everyone.  While they were there, Jane chatted with Rachel, one of the baristas she became friends with.  It turned out that Rachel wasn't planning on going anywhere for turkey dinner, so we invited her to our table.  She arrived later with a beautiful orchid and coffee.  It was such fun to have her and she was so appreciative of the homemade spread complete with our big bird, dressing, gravy, mashed potatoes, yams, green bean casserole, rolls, cranberry relish and then Oma's famous apple tarts.  Cam's blessing of our dinner was quite abbreviated, which may have had something to do with his hunger level.  After feasting, we were all thoroughly stuffed and ready for relaxation. 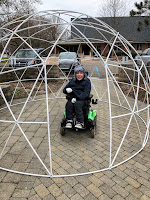 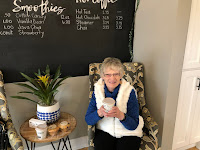 Friday morning, Oma wanted to see Brody's be Cafe before they headed back up north.  She and Jane chatted over delicious peppermint mochas and Oma loved the atmosphere and welcoming spirit. 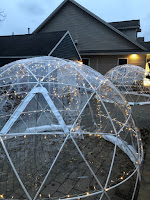 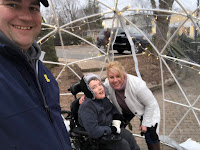 It turned out the Weatherford family was due back at the Cafe later that afternoon.  Chris, Jane and Cam were signed up to volunteer with igloo setup at the back entrance.  It took well over 2 hours and Cam insisted on staying out in the cold with his dad to be sure it was connected properly.  The second dome installation was much faster than the first.  After the string lights went up, it all looked simply magical. 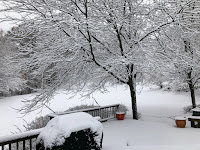 Seating was added for six with a heater and warm, cozy afghans in each igloo.

The set up seemed just in time since early Sunday morning, we awoke to a beautiful blanket of snow.

Camology Quotes:
When Ms. Michelle arrived, Chris had an idea to get him to come to the door.  He called out to Cam and said there was a special delivery from Amazon just for him. Cam countered with:   "I cannot sign for Amazon.  I am just a boy, not an adult!"
Posted by Special Moms at 9:58 PM