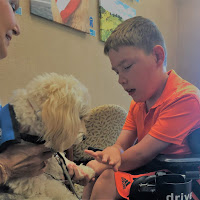 "The unexpected moment is always sweeter." ~Julia Quinn
"Surprise is the greatest gift which life can grant us." ~Boris Pasternak

We live in a community that continuously offers different events.  One that Cam enjoys in the summer is part of our library district.
Ruff Readers is a unique read-aloud program in partnership with West Michigan Therapy Dogs, Inc. that pairs kids with a trained therapy dog and their handler. Kids read their favorite book and the pooches curl up, listen and enjoy. 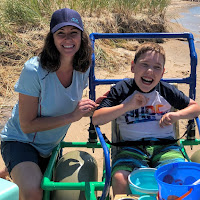 When Saturday arrived, Cam had no idea how many surprises he would encounter that day.  We began our adventure before lunchtime and traveled northward to Oma and Opa's.  After a delicious lunch at the cottage, it was beach time! 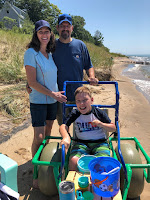 Just as we were headed outside down the steps, Auntie Roe suddenly appeared!  Cam couldn't believe it- an entire year had passed since he'd seen her.  A few years ago, Auntie Roe taught Cam some Portuguese and his favorite phrase is "barriga grande" (bar-he-gah gron jay) which means "big belly" and it still makes them both crack up. 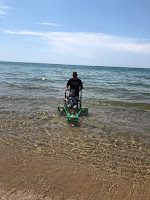 It just so happened that Mr. Mike and his wife Auntie Roe were camping a few miles away at Meinert Park for the weekend.  It was so awesome to see them both, soak up the sun and catch up a bit.
The Lake Michigan water was a bit too nippy for Cam who opted not to take a swim.
Our visit was cut short due to an impending event- the Annual Cousin's Baseball Game! 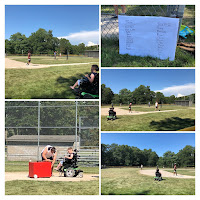 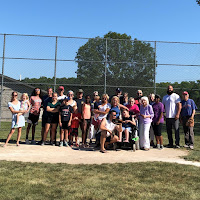 We hurried over the ballpark where the game was already in play. Younger cousins Harper and Maya, Gavin, Ella and Aiden were all there along with Dirk and Lisa, Megan, Joey and Ashanti and Eric.  Aunts and uncles, Oma and Opa and family friends were in full force too!  It was the perfect afternoon- sunny with a few clouds and a nice breeze.  Cam used his batter box a few times, Jane managed 3 base hits and Chris had his share as well.  Ball game snacks were plentiful and even a delicious platter of fresh fruit arrived with Aunt Betsy and Uncle Jon.  Harper is truly the cousin baseball star as we watched him practice hitting home runs again and again after the game ended around 5pm.  Cam kept commenting how great his cousin was!  Before Aunt Betsy and Uncle Jon left, they gave Cam an early birthday present- a cherry scone mix and t-shirt from Cherry Republic.  They know how much he loves baking! 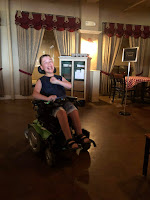 Our group made its way to Fricano's in Muskegon where Aunt Joyce had reserved a large section for us.  Jane has been eating their famous thin crust pizza since she was a kid and it's been a family tradition 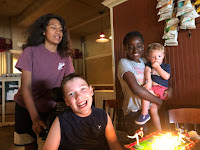 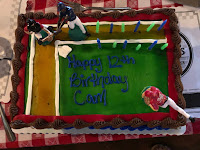 ever since.  Cam had no idea, however, that Aunt Joyce and family had ordered a Ryke's birthday cake for our soon to be 12-year-old.  After dinner, Chris took his son on a stroll while we readied the cake at Cam's place setting.  When he rounded the corner, he couldn't believe it!  A delicious chocolate cake complete with the entire baseball lineup of pitcher, catcher and batter.  Everyone had signed a card for Cam and his cousins Harper, Maya and Aiden assisted with operation candle blow-out!

Cam kept asking "How did this happen?"  "Where was the cake hiding?" and the perfect comment..."This was the best surprise ever!"

Camology Quotes:
Cam is very keen on planning dinner and knowing what he's going to have for dinner.  He was planning his Friday evening consumption and asked Jane to guess which place he would choose to pick up dinner from.  After going through a list of 3 others (Culver's, Moe's, Arby's) she finally landed on Chick-Fil-A.  Cam's response:
"Mom, I really stumped you on that one!"

We all try to eat dinner as a family, but some evenings, Cam eats before his parents.  On this particular night, Jane asked Cam to join his parents at the table to chat while they ate.
(while driving his chair towards the dining room)
"Mom, what are you having for dinner."
"We're having salmon."
(immediately turns around and heads in the opposite direction)
"Good-bye!"
Posted by Special Moms at 7:23 PM