And Then There was Twelve - Week of Aug. 12th 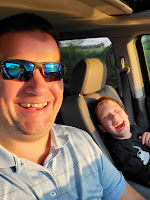 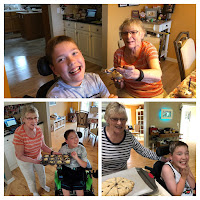 12 months in a year, 12 hours on a clock and this week, Mr. Cameron was turning 12!
Before his actual birthday on Saturday, though, he had a full social calendar.
Oma arrived on Monday to stay until Wednesday since our Cam Care team had other commitments.
The baking buddies were busy making cherry scones with a mix from Cherry Republic (thanks to an early bday gift from A. Betsy and U. Jon).  Cam was intrigued by the process since he had never had a scone before.  The dough had to be kneaded and rolled out prior to baking.  They smelled so delicious it was tough to wait until they were done!  Next up was homemade blueberry muffins from Cam's cookbook.  Oma and her grandson found a recipe for the muffins made with vanilla yogurt, honey and less sugar than typical muffins.  And of course, a trip to Culver's for dessert one night was in order. 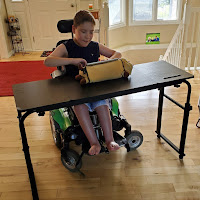 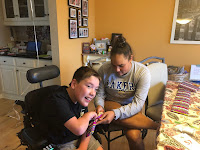 Ms. Mary Jo helped out a couple of days during the week too and brought Cam some early bday presents- a book of 2000 Would You Rather questions, a flag kite and a king size Reese's peanut butter cup.  Cam screamed when he opened the chocolate treat.

Friday evening, our friends from North Carolina arrived - Auntie Leslie, her daughters Ali and Erin and their boyfriends, Daree and Brandon.  This crew kept us all laughing. 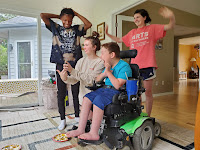 And finally, the day of Cam's actual birthday, Saturday, Aug. 17 was here!
The first present opened was from Mom and Dad and Auntie Karen.  A new desk for Cam he can drive under and wheel anywhere in the house was something that had been a needed item for quite some time. 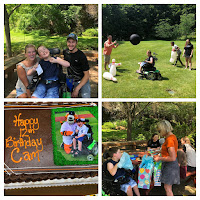 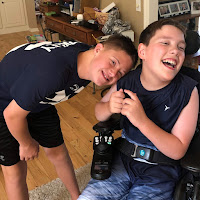 The celebration for our 12-year-old was small but mighty with
Cam's buddy, Brody, our N. Carolina crew, Ms. Amanda and Nick and Oma and Opa.  The birthday boy opened another present from his parents- an over sized inflatable backyard bowling set.  The goal was to knock down the blown up pins, which looked much easier than it actually was.  Cam was able to push the ball with his chair and in a short time, everyone was sweating from the effort and sunshine. 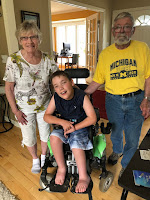 Pizza and bread sticks filled everyone's bellies and we were fortunate to have Oma and Opa pick up Cam's bday cake from our favorite Dutch bakery, Ryke's.  Frozen custard, a.k.a. the tastiest ice cream, rounded out our dessert.  The birthday boy opened up awesome presents from Oma and Opa included a Timex watch, swirly kite, book, new school shirt and s'mores kit, a kid's drone, sea creature kit, gift card and chocolate from the N. Carolina crew, iTunes gift card from Ms. Amanda and Nick and an iTunes and Amazon gift card from Brody.  What a big day it was! 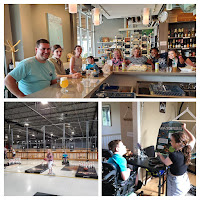 The fun didn't end as we had more adventures awaiting us on Sunday.
With our friends still in town from N.C., we wanted to show them Grand Rapids.  First, we headed to the G.R. Fowling (pronounced Foe-ling) Warehouse to try something new...throwing a football at bowling pins.  It was pretty hilarious watching everyone figure it out. 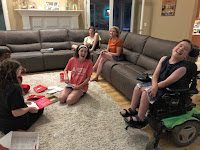 Upon departure, the rain had stopped and we were off to the Downtown Market where we all enjoyed a different lunch from a variety of choices.  A walk downtown finished out our late afternoon and we even heard a jazz festival we had no idea was taking place.  After grilling dinner, we played an entertaining game of Scattegories which Cam loved.
That evening, Cam broke his record for staying up late, not wanting the time to end.
Perhaps Robert Frost was enjoying a good time when he wrote "The woods are lovely dark and deep.  But I have promises to keep and miles to go before I sleep." 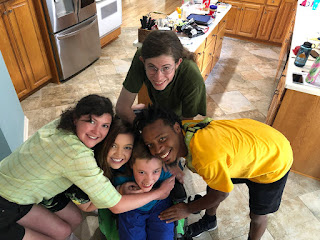 Camology Quotes:
Cam really bonded with Leslie's daughters, Erin and Ali, along with their boyfriends, Brandon and Daree.  We took this picture right before their departure.
"Mom, when we will see them again?"
"I'm not sure, Cam.  Maybe next year?"
"They are awesome.  It is not fair if we have to wait a whole year to see my good friends!"
Posted by Special Moms at 11:29 PM