CamMobile II - Week of May 27th 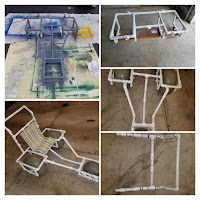 "The value of an idea lies in the using of it." ¶ "To have a great idea, have a lot of them."  ¶ "Our greatest weakness lies in giving up.  The most certain way to succeed is always to try just one more time."  ~ Thomas Edison

A need is typically born out of necessity.  And necessity breeds ingenuity and creativity.
Spending time on the beach as a family has always been a requirement for us.  The creation of the 'CamMobile' was a direct result of that prerequisite.  A typical beach wheelchair starts at $2,000 and can be upwards of $5,000.  Since it is considered recreational, it is not a cost covered by insurance. 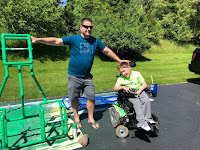 Because Chris and his son are quite the handy team, they designed and built the first CamMobile in the summer of 2013.  Now, six years later, it was time for a new one since Cam has grown quite a bit.  The duo worked over the course of two weeks in the hopes that the new Mobile will debut next weekend! 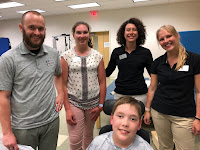 On Friday, it was back to work after school for our eleven-year-old at Grand Valley State University working with the graduate students.  They asked Cam a variety of questions and worked on some stretching and sitting.  At one point, a student name Erick said, "So Stam..." and Cam could not stop laughing (nor could the rest of us) for quite a few minutes.

We were most fortunate to welcome 'Auntie' Karen Friday evening.  She had planned on attending Cam's last baseball game of the season on Saturday.  Lucky for us, a rental snafu meant she was hanging out with us for the week. 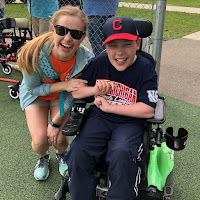 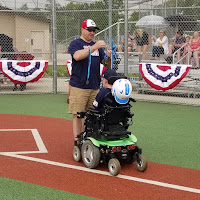 Saturday morning, the weather looked a bit suspect.  Since it was the final WMML game of season, we knew they wouldn't want to cancel.  The volunteers on the schedule- Mary Free Bed Rehabilitation Hospital😃  We arrived to find Janae, our Mary Free Bed buddy who we had just seen the day before at Grand Valley!  She was excited to be Cam's helper for the game.
With the impending storm clouds and the rumble of thunder, a decision was made to conduct the medals ceremony first.  Each player receives a medal designating the season and year for WMML. 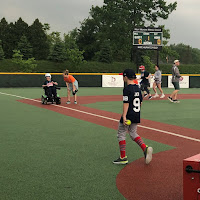 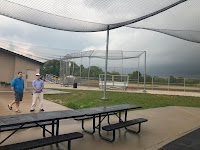 Our Cam Fans were in full force led by Auntie Karen, former teacher Ms. Kathy and her husband Kevin, as well as cousin Mike.  After a short rain delay, Cam's team was able to play a full inning and both teams were up to bat once.  Our ball player was all smiles as he headed for home plate.
They cut the game short as everyone dashed for their vehicles as the rain began to pour down in sheets.  We should've known because on our drive to ballpark, Cam was watching the sky through the window and declared, "So, this does not look good!"

When father and son tackle a project, they often talk through issues to find a solution.  Chris was puzzling how to re-create handles for the CamMobile and make them movable.
"Dad, why don't you look at my old blue stroller.  It folds up just like you are thinking."
"Cam, seriously, that is a great idea.  Wish I would've thought of it!"