A Little Water with Your Picnic - Week of June 23rd

If ants are such busy workers, how come they find time to go to all the picnics? ~Marie Dressler 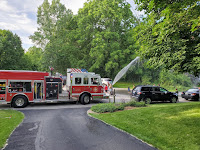 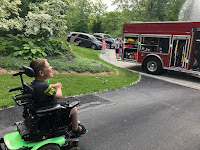 Even though we moved one street over from our former neighbors 7 years ago, we are still invited to the annual picnic.  Each and every time, we typically meet new homeowners who feel that special vibe we did when we first moved in. 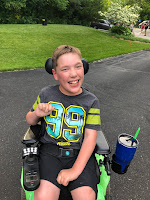 One of the Windcrest residents works for the Cascade Fire Department.  As a surprise treat, the fire engine arrived after everyone had eaten a delicious potluck meal.  The fireman unraveled a hose, let the kids try it, and another firefighter controlled a sprayer on the top of the truck.  Chris was chatting with one of the guys when they were packing everything up.  Cam's dad asked how much water they had just used and the response was "about a thousand gallons." 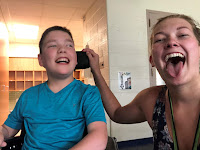 On Thursday, Jane traveled to North Carolina for the weekend and back home, Ms. Amanda kept Cam busy.
Her new job as a kindergarten teacher will start this fall and she was given the keys to her new classroom.  She and Cam ventured over with the van loaded up.  They expect a few trips over the summer as Cam eagerly volunteered to help her set things up.

For Saturday, the boys had an outing planned about an hour away.
The 2019 Great Lakes SUP (Stand-Up Paddleboarding) Challenge was on the agenda. 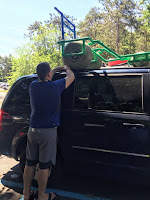 West Michigan, specifically the Grand Haven/Holland area, is one of the origins of Stand-Up Paddling on the Great Lakes.
There were multiple races scheduled at Kirk Park, which

is located 12 miles north of Holland along the shores of Lake Michigan.

Luckily for the boys, Auntie Karen was heading that way too.
Chris unloaded the Cam-Mobile from the van so that a beach side seat could be possible.
It was a warm morning, but thanks to Auntie Karen's umbrella, she and Cam kept cool in the bright sunshine.

We also discovered through some research that there is an adaptive paddle board system.  It incorporates a crafted standup board, an all-terrain surf chair, a custom ramp which allows the wheelchair user to roll onto the board unaided, and a mechanism to lock it securely in place. Outriggers on either side lend stability as the rider skims across the water's surface.
It's very encouraging to see so many activities available in adaptive form! 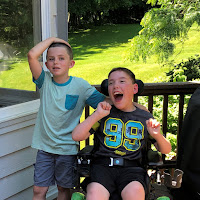 Camology Quotes:
Cam requested another haircut from our friend, Melissa.
Melissa's son, Mason, came over too, but was reluctant to have his trimmed.  However, after some comprising, Mason was allowed to "shave" off some areas himself before passing the clippers to his mom. Later that evening, Jane commented how great Cam's haircut looked.
Chris said, "I guess I should've asked for a haircut too."
"Dad, you should check to see if Mason is available! (insert Cam laughter)"