“How lucky am I to have something that makes saying goodbye so hard.” ~ A.A. Milne
"Sunsets are proof that endings can be beautiful too." ~Anonymous 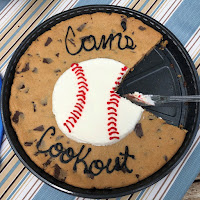 It's hard to believe the last week of school was upon us.  Since Thursday was a half day for Cam, it was determined to be the best afternoon for the annual end of school cookout.
This was Year 5 for the backyard party and even though our fifth grader changed schools from lower elementary to the 5/6 building, Cam insisted that his teacher friends from K-4 still be invited to the festivities. 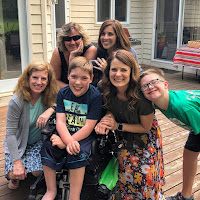 It was a warm afternoon, but not too hot with just enough cloud cover for a pleasant deck experience.  Due to schedules, only one of Cam's classmates could attend- his best school buddy, Brody.  However, his teachers, Ms. Barbara and Ms. Kathy and aide, Ms. Cris and daughter Mary Jo, Ms. Kendra and Ms. Kate from Meadow Brook were all there. 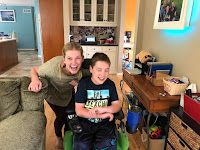 And this year's crew from Northern Trails 5/6 were in full force- teacher Ms. Konkle along with her team of Ms. Jo, Mrs. Holt and Mrs. Tietema.  We are thankful Cam will have Ms. Konkle again in the fall for 6th grade.
We also celebrated Ms. Amanda being offered and accepting a job as a kindergarten teacher at Meadowlawn Elementary.  We're so excited she'll have her own class.  Cam is excited to help organize her classroom this summer! 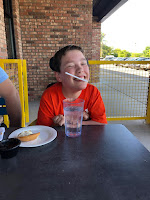 Friday's half day signified the final day of 5th grade for Cam.  Chris and Jane decided to celebrate with their son by taking him out to a new place for dinner.  Buddy's Pizza, which originated in Detroit, now has a restaurant on 28th Street in Grand Rapids.

Buddy continues to serve The Original Detroit Style Pizza, made from scratch soups, and Antipasto salad. Over time they've added a variety of items to their menu including gluten-free pizza, multi-grain crust, pastas, burgers, sandwiches and more - each prepared just as they would have been in 1946 — with the freshest ingredients and an acute attention to detail.
It was such a nice evening, we decided to eat outside.  We all declared it was delicious and determined we'd definitely be back. 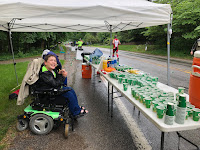 On Sunday, Jane celebrated a "decade" birthday with her boys.  It was also the day of the Grand Rapids Triathlon, which meant that driving on the road leading out was highly discouraged due to all of the runners.  Chris and Cam went to check out the race and were quickly volunteered as helpers to assist with passing out water and alerting the runners to available power snacks on the table.
After they finished their impromptu volunteering stint, it was a perfect, relaxing day for the whole family.  Jane could hardly believe it when her husband and son presented her with a picture book for her bday, including a snapshot of her present to be delivered in 2 weeks- a hot tub!  Talk about being blown out of the water... 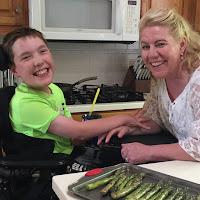 Camology Quotes:
Cam is always cognizant of the happiness of others and continuously interested in technology.

"Mom, you are the the most beautiful mom I could have!"

"Thank you, Cam. Let's figure out who else has a birthday today."

When Jane pulled up Google and moused over, she couldn't believe it! 'Happy Birthday, Jane!'

"Mom, how in the world does Google know it is your birthday?!"
Posted by Special Moms at 1:22 PM