It seemed that our household was experiencing a bit of Murphy's Law this week.
Murphy's Law ("If anything can go wrong, it will") was born at Edwards Air Force Base in 1949 at North Base.
It was named after Capt. Edward A. Murphy, an engineer working on Air Force Project MX981, (a project) designed to see how much sudden deceleration a person can stand in a crash. One day, after finding that a transducer was wired wrong, he cursed the technician responsible and said, "If there is any way to do it wrong, he'll find it." The contractor's project manager kept a list of "laws" and added this one, which he called Murphy's Law. Shortly afterwards, the Air Force doctor (Dr. John Paul Stapp) who rode a sled on the deceleration track to a stop, pulling 40 Gs, gave a press conference. He said that their good safety record on the project was due to a firm belief in Murphy's Law and in the necessity to try and circumvent it. Aerospace manufacturers picked it up and used it widely in their ads during the next few months, and soon it was being quoted in many news and magazine articles. Murphy's Law was born. 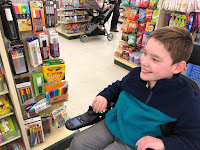 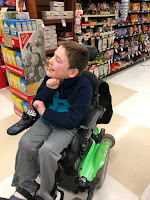 Jane flew out early Sunday to Dallas, TX for work.  That very day, Chris felt ill.  Cam went to school Monday, Chris stayed home and Tuesday night, Cam was sick.  He had to miss school Wednesday and Jane arrived home Wednesday evening.  Jane kept Cam home on Thursday to be certain he could keep food down and Friday, our home was finally back on track.
So, when Saturday rolled around, it was a welcome relief.  Chris headed up north for a last day of snowboarding with Greg.  Cam was Jane's expert helper. At the grocery store, Cam's mom tells her son what's on the list and he leads the way to the next set of items.  D&W is our closest grocery store and this kid knows where everything resides in the food aisles.  The next stop was Hobby Lobby for some spring home beautification items. 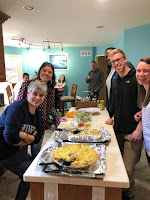 The next day, we gathered everyone together for Sunday dinner, including the Raisch fam and friend Biala, minus Megan who didn't feel well :( 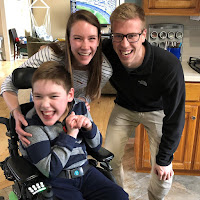 Because Sarah and Anna and Anna's boyfriend Spencer were home from college for their spring break, it was extra special.  Costco provided our meal as we enjoyed shepherd's pie, chicken alfredo and kale salad.  Cam is a good judge of character and he has given Spencer a thumbs up.  It's a high honor considering Anna is one of his most favorites in the whole wide world.

Cam was worried about Jane getting sick too.  They were chatting about it Friday morning before school.  Cam's mom told him, "Maybe I'll be like Wonder Woman and have a super power to not get sick."  To which her wise son responded...

"If I could have a superpower, it would be that I can eat anything I want to when I am sick!"
Posted by Special Moms at 5:05 PM

I sent this to Spencer! Thank you for dinner and for welcoming him into your home! We loved getting to see you all :)