"I've got to admit it's getting better. It's a little better all the time." ~Paul McCartney

If you ever wondered if there was any way to determine the possibility of a snow day, besides listening to a meteorologist, it turns out there is a snow day calculator online.  One may also take note that it was spot on in its prediction!  Even the deer prancing through the back yard seem to be running away from the white stuff.

On Tuesday, Cam headed in to meet a new doc, a pediatric rheumatologist.  He had reviewed Cam's blood work and latest effusion as well as our medical histories. After examining how our son's joints were responding, he noted exactly where Cam's pain was in the left leg. Conclusion: more tests needed.  After a notation to schedule an MRI, we headed off to drop Cam at school and pick up a prescription later that day.  For the first time in many weeks, Cam (and his parents) had a much more restful night of sleep.  For starters, it was the first time Cam was able to remain in his bed the entire night (vs. couch, power chair, hammock swing) in a very long time. 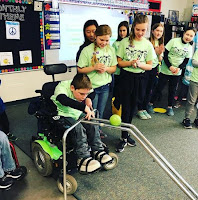 The extra sleep couldn't have come at a better time.  Cam's class had a field trip to his former elementary school, Meadow Brook.  What a treat to visit the younger kids he knew and all of the teachers, aides and the Project Unify team.
The friends all played bocce ball together and shared their lunchtime.  Cam named all of the teachers, friends and aides he saw.  A big shout out to Ms. Barbara, Ms. Nancy (who Cam claimed was most excited to see him), Ms. Ginny, Ms. Erin, and Ms. Kate!  Upon arrival home that day, Cam did declare it was his "most favorite field trip ever!" 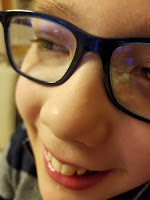 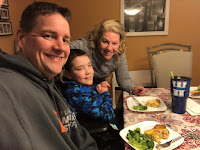 Back at home, we were spoiled by Aunt Carol, who made us a homemade meat quiche and had her son Chad deliver it to us so we could enjoy a delicious meal without the prep work.  And wow, was it so tasty.
We received an email from Cam's teacher at the end of the week noting that she'd seen a big difference in him at school since he'd been experiencing more restful sleep.
And truly, our family noted a definite upswing on the mood scale overall.  Our theme song is no longer "I'm So Tired" by the Beatles... 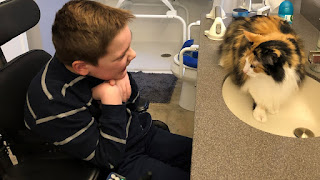 Our cat, Stella, is a member of the family.  She arrived a year before Cam and became his unofficial protector when he came home from the hospital after he was born.  She follows his powerchair in the morning and loves to play with water in the sink.  Cam has many a 'conversation' with her to which she sometimes does respond with a typical 'meow.'