Applesauce is the Best Medicine - Week of Mar. 4th

Medicine is a science of uncertainty and an art of probability. ~William Osler 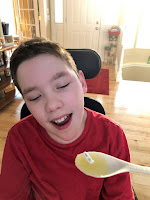 It's difficult to determine at what age a kid can start swallowing pills versus taking a liquid medicine.  In our home, it just so happens that age is 11.
When we picked up the celebrex medicine for Cam to help with his leg pain, it came in a coated tablet.  He had already succeeded in taking baclofen in pill form recently, so we weren't too concerned about another one.  Now you may wonder about the method used.  Cam's mom believes that everything tastes better with Oma's homemade applesauce and she has successfully passed along that gene to her son. 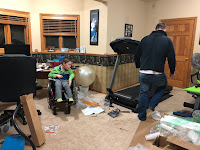 With improved sleep, we were feeling rejuvenated by Saturday.  Since our old treadmill had begun to deteriorate, we decided to use our tax return to purchase a new one.  It arrived Saturday morning and the unpacking process began downstairs.  Always the watchful supervisor and helper, Cam and his dad spent a couple of hours getting things set up. 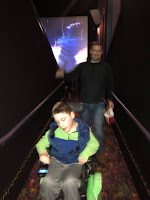 That afternoon, we went as a family to see the Lego 2 movie at Celebration Cinema.  We all enjoyed the show and there is a very catchy song called "Everything is Awesome" from the first Lego movie and also heard in the second one.  Cam laughed the loudest when they changed the words of the original song to "Everything is Not So Awesome" near the end of the show. 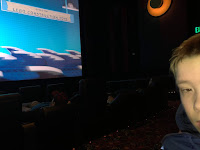 We munched on popcorn and then picked up some ice cream to go from Cold Stone Creamery.  Cam declared the entire day was "awesome!"

Back at the house, Stella provided our own home entertainment as we watched her trying to let go of and then catch the helium balloons.

Miss Amanda typically stays later on Fridays to have dinner with Cam and hang out while Chris and Jane enjoy some time out themselves.  At the end of the week, there is always a decision point.  Where will Amanda and Cam pick up their dinner from?  When asked the question Friday afternoon, Cam's decision was:

"I would like some Culver's. Welcome to Delicious!"
(someone has been watching the Culver's commercials on tv)
Posted by Special Moms at 9:04 PM

Excellent blog post, I have bookmarked your site so ideally I’ll see much more on this subject in the foreseeable future! effects of anxiety