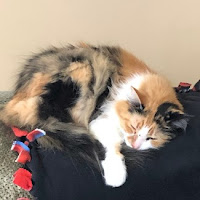 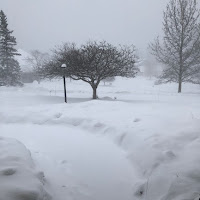 "A snow day literally and figuratively falls from the sky, unbidden, and seems like a thing of wonder." ~Susan Orlean

Cam's dad never experienced "snow days" in his younger years since he lived in Arizona and Washington state for most of his schooling until college.  Cam's mom recalls some days off growing up due to heavy snow. 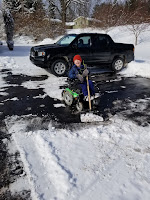 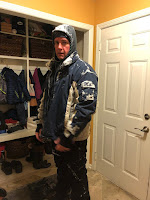 However, this week seemed one for the history books since Cam had every...single..day at home while the city tried to recover due to inclement weather.  And fortunately for Cam (and Jane!), Miss Amanda also experienced school closures and was able to make it over to hang out with her buddy every day while Jane worked.  Our cat, Stella, seemed to go into hibernation mode for the duration. 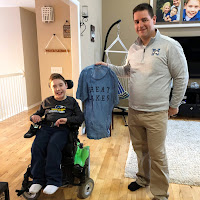 The blustery mornings were a combination of heavy snow and frigid temperatures.  A couple afternoons held reprieve allowing Cam to assist with shoveling while Chris tackled the heaviest white stuff in the converted riding mower/snow plow for the winter months.

With negative temps one morning, Chris and Cam tried a little science experiment.  After getting one of Chris' t-shirts wet, ringing it out and putting it on a hanger, they hung it outside on the front porch.  It only took a few minutes for the garment to flash freeze into an icy hardened shirt that nearly "stood up" by itself. 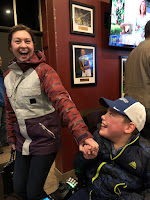 By the time Friday rolled around, cabin fever had set in.  Fortunately, we were honored to be invited to a dinner celebration for Miss Amanda and Nick's engagement.  It was hosted by Nick's family at a local restaurant, Brann's.  We had quite a crew assembled: Miss Amanda's family including Aunt Carol and Uncle Jim as well as Nick's family and our family.  Cam was sporting his new hat "Boverhof Builders" a gift from Uncle Jim and Aunt Carol depicting their business name.  They certainly did a nice job keeping our son occupied as we waited for food to arrive.
Nick's sister, Brooke, has been to Cam's baseball games as well as the Halloween parades.  We think Cam may have a little crush on her :) 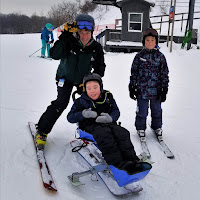 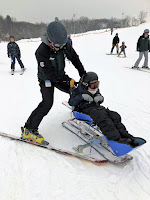 The next morning, we had a big day planned.  A few months ago, Mary Free Bed offered a sign up for Adaptive Skiing at our local ski area, Cannonsburg.  The event description- An invigorating schuss down the slopes provides both a good physical workout and social networking opportunities. Downhill skiing is available to individuals with various types of disabilities. Professional volunteers are provided by the Cannonsburg Challenged Ski Association, a chapter of Disabled Sports/USA.


An instructor is paired with the adaptive skier and they're able to hit the slopes for an entire two hours.  We arrived at 9:30a ready for 10 o'clock start time.  Cam was assigned to Rick, his instructor and Rick's son, Ben, who acted as the 'blocker' making certain others don't ski too close.  As an added bonus, Chris brought his snowboard and was offered a discounted lift ticket to join in the fun.  Since he was able to board alongside, he captured some great video of Cam in action!  Although Cam wasn't sure at first, after his first run down, he declared "This is awesome!"  Over and over again, up the chairlift and down the slopes they went.

Afterwards, we were able to warm up in the lodge and have lunch before getting ready to go.  In the meantime, one of our local news crews had arrived.  Mary Free Bed asked if we would chat with them to talk about our experience.

From Wood Radio: A partnership between Cannonsburg Ski Area and Mary Free Bed Rehabilitation Hospital allowed a group of kids with special abilities to hit the slopes on Saturday. Specialized equipment like downhill ski sleds and arm riggers helped to ensure that children of all abilities shredded down the slopes. Jane Weatherford is no stranger to the challenges her son, Cam, faces. While he is typically bound to his power chair, on Saturday, he was free. “Having that freedom. Like anyone else, skiing,” Weatherford said. “Having that freedom of sitting and being able to go down the hill like everybody else on skis, it's incredible." No mogul too sick, no bump too gangly. “What’s important for us, too, is that community at large sees the inclusiveness and the inclusion of people who normally don't have the ability to do things like this,” Weatherford said. Things any kid would enjoy like something just as simple as freedom – and going fast. 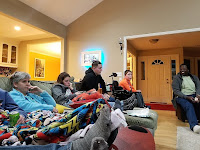 On Sunday, we hosted a small SuperBowl viewing with our neighbors and friends, while feasting on wings, homemade french fries and a various assortment of other 'not so healthy' items to munch on.

The football game wasn't too exciting for Cam, and lucky for him, his buddy Emma decided to join in for quite a few rounds of the board game "Guess Who?" which has become his favorite.

Before the end of the evening, Cam made certain Jane had sent out an email about adaptive skiing, ensuring we knew when signup would take place for the next season.  Our son may be excited about hitting the slopes next year, but his parents are even more giddy about the possibility for our family to participate in a sport available to us all. 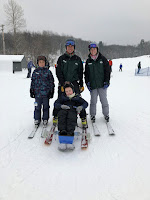 On Saturday, when we arrived at Cannonsburg, it was still below freezing, but by the time were ready to leave a little after 12p, the parking lot had turned into a slushy mess.  As we waited in line to drive up the hill to exit, we realized we would be waiting quite some time as we watched one vehicle after another become stuck.
Cam, in his infinite wisdom, announced:
"This is not my idea of fun."
"Someone needs to call the police."
Posted by Special Moms at 7:08 PM