Fun Valentine's Facts: Wearing your heart on your sleeve is more than just a phrase. In the Middle Ages, young men and women drew names to see who their Valentine would be.  According to Smithsonian, they would wear the name pinned to their sleeve for one week so that everyone would know their supposed true feelings.
People consider pink and red the colors of love. According to the National Confectioners Association, around 65% of Americans believe that the packaging of Valentine's Day candies and chocolates should be red and pink.
Candy hearts were originally medical lozenges. In 1847, Boston pharmacist Oliver Chase invented a machine that simplified the lozenge production process, resulting in the first candy-making machine, according to The Oxford Encyclopedia of Food and Drink in America. After identifying an opportunity to revolutionize the candy business, Chase shifted his focus to candy production with Necco wafers. It wasn't until 15 years after the creation of Necco wafers that Daniel Chase's brother, Oliver Chase, developed a way to press words onto the candy lozenges with a felt roller pad and vegetable food coloring. According to The Huffington Post, the conversation candies officially became heart-shaped in 1902. 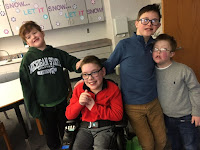 In the classroom, buddies Ben, Brody and Gerrit are always ready to hang out.  These guys have been together since kindergarten. 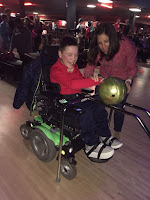 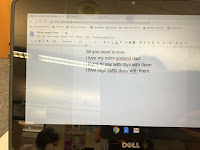 Cam is using the keyboard on a small computer to type his homework and writings at school.  For his journal this week, his entry as shown: "All you need is love.  I love my mom and dad. I love to play with toys with them. I love to go out to dinner with them."

A Valentine tradition at Northern Trails 5/6 is school-wide bowling on or around Feb. 14th.  We had called ahead to be certain Cam's powerchair could make it onto the lanes.  Our 11-year-old announced upon arrival home that day, "It was so cool that my entire school was there.  They had 2 times for different classes to be there.  It was fun!"

Friday marked a half day for Cam and Oma and Opa were so sweet to drive in to spend the afternoon with their grandson while Jane worked. 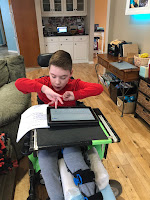 Cam kept Oma busy playing Guess Who and other games during the day. 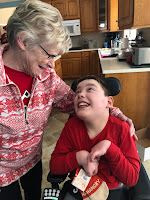 He also showed off his typing skills since Cam's school sent home a Chromebook (small pc) just like he uses in the classroom.
Oma had her hair done on Saturday.  She looked so pretty when she got back.  Cam showed off a V present from his parents: "Hangry" socks.  It is definitely one of his moods if he isn't able to eat at regular times: hungry + angry= hangry! 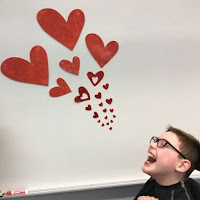 We didn't venture out on Sunday since the weather turned into a blustery snow globe outside. 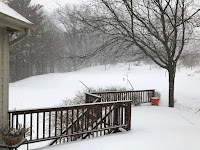 Cam has acquired some pretty funny sayings...while giving his parents hugs.."I am squeezing all of the love out of you!" or "I am refilling your love!"

Driving down the driveway after Chris plowed:
"My dad is the nicest dad!  He is the nicest one I've seen in years."
Posted by Special Moms at 10:02 AM