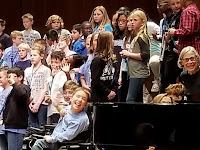 “Music is the fastest motivator in the world.” ~ Amit Kalantri

Last year, Cam wasn't feeling well when the 3rd and 4th graders performed together for the annual spring concert.  Now, as a 4th grader, our son was anticipating the Tuesday night concert and feeling great! 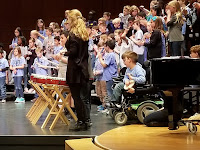 As an extra special treat, Oma drove into Grand Rapids to see the musical.  Cam's grandma actually taught music in a school system a "few" years ago.
Cam's concert was titled "From the Inside Out, A Celebration of Positive Character."  Since the third and fourth graders were combined, there was a total of 9 different classes!  11 musical numbers were performed and Cam proudly played the drum for his part.  We cannot thank Oma enough for making her grandson feel extra special at his first concert appearance. 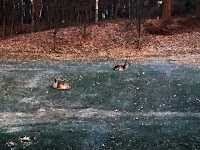 Most mornings, we have a regular routine but some days, a few surprises make us pause.  We often see deer in our backyard, but have never seen them sitting down and looking so peaceful in no hurry to move. 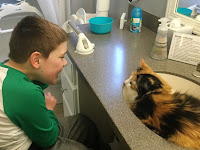 Although Stella has her own agenda while Cam is getting ready, she does like to hang out in the occasional sink and Cam graciously approves of her temporary housing in his bathroom. 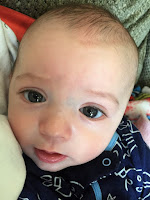 A first for Cam this weekend was taking on the role of babysitter assistant.  We had the pleasure of watching baby Jackson for a few hours on Saturday.  Since he had met us just the week before, we were hopeful he would remember his new buddies.  As expected, he was a model infant and gave Cam and Jane plenty of smiles. 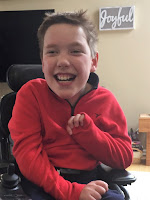 We can't wait for our next sitting adventure!

Camology Quotes:
When baby Jackson arrived at the Weatherford home, he was sleeping.  Cam quietly said to him mom.
"Mom, I will listen for baby Jackson.  When I hear him whining, I will come and get you right away!"

Jane had a big laugh when Jackson tried putting his entire hand in his mouth, to which Cam commented.
"Ewww, gross, Jackson.  What are you doing?!"
Posted by Special Moms at 7:10 PM