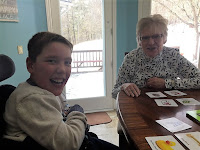 "You have to learn the rules of the game. And then you have to play better than anyone else." ~Albert Einstein
“The way a man plays a game shows some of his character. The way he loses shows all of it." ~Anonymous 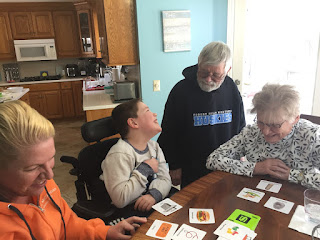 Cam's parents have always loved playing board games and card games.  Chris and Jane have their favorites and Cam is creating a list of his own.  Thankfully, new games are still being marketed in this age of technology.

Oma and Opa arrived late in the day on Friday to spend the night with us.  One of the Christmas presents they gave Cam was a card game called "Slapzi."  Each player is dealt 5 cards and the cards have a picture on each side.  There is also a stack of questions indicating the next type of picture to be found.  For example the card may say "I can fit in a pocket" or "I have 2 legs" and then each player needs to look at both pictures on each card to determine if one of the pics fits the description.  If one is found, they need to slap it on the pile before an opponent does.  Lots of laugh in this game as some photos didn't quite fit the question cards but were still attempted to be slapped down! 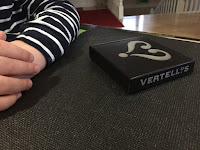 Another new game given to Jane by Chris is called Vertellis.  It is a Dutch card game meaning "tell me more."  One of the rules in this game is to put away all electronic devices.  It is a game of retrospective and future-thinking questions.  Jane and Cam played the entire game together, asking and replying.  Jane's favorites from her son included the following: "To what are you most looking forward to in the coming year?"  Cam: "Cousin James wedding!  We get to go on a plane!" And two of the questions provided the same answer from our boy.  "Who has inspired you the most in the last year?"  "Who do you want to thank from the past year?" Cam: "Miss Amanda!"  And lastly, "Who has surprised you the most this past year?" Our literal boy answered "Auntie Roe" since she surprised us by stopping in one day last month.

Something to remember...most any activity can be turned into a game.  Taking the garbage to the curb on Sundays becomes a pursuit of skillfully racing while balancing a container!

Camology Quotes:
Miss Amanda was starting her student teaching this week.  She told Cam she was super scared and nervous about it.  And this was his response...
"Well, don't be scared because once you get there you'll realize there is nothing to be scared about!"
Posted by Special Moms at 7:48 PM