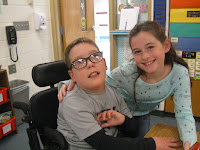 Some weeks breeze by due to busy schedules, while others lag because of unexpected developments.  Cam picked up a nasty cold in the beginning of this week characterized by a runny nose and slight cough.  As the week progressed, we realized if we had bought stock in Kleenex, we'd be much better off.

Routines are part of daily life and when they are broken, it can be tough to figure out replacements.  On any given weekday, the school schedule is one that our fourth grader delights in.  Being home sick for two days in a row is not Cam's preference.  He would much rather be working at school.  To cheer him up, his teacher sent pictures she had taken of Cam and his best buddy, Brody as well as another friend, Audrey.  Ms. Kathy also provided some links for homework so her student would have some extra studying. 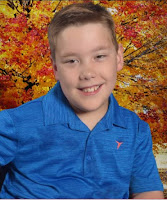 People often remark how sweet Cam's smile is.  He has a temperament to match.  When Jane told him how handsome he looked one day, he looked up and said "That warms my heart, Mom, thank you."  Certainly, he's heard the phrase before, but when it comes from a ten-year-old and sounds so sincere, it truly is heartwarming.

By the end of the week, our son was feeling better and returned to school.  We all agreed that this year's school pictures are one of his best! 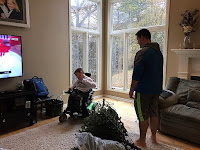 On Saturday, a family project included putting up the Christmas tree. Cam supervised the effort assisting with the re-arrangement of things to clear out a space for the holiday's main attraction.
Chris thought we should try setting it up as part of Cam's chair which led to much laughter and Cam's explanation of why this would never work. 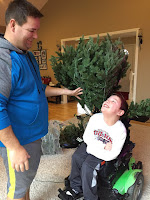 True to our sweet boy's nature, he insisted that decorating the tree must be delayed until Oma and Opa's arrival for Thanksgiving!

It helps to have a partner in crime.  Chris found an item online he wanted to purchase and Jane was asking about some specifics which were being challenged when Cam chimed in.