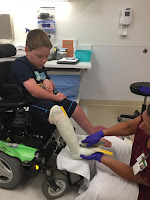 If you've ever met Cam in person or looked closely at his pictures, you'll see he wears AFO's.  In our household, we've become so accustomed to the abbreviations, we forget others may not know.  An AFO is an Ankle-Foot Orthosis or brace that encumbers the ankle and foot.  And here's the cool thing- it is customized just for Cam.  This means every year (since he was just over 2 years of age) he has picked out the color scheme for his brace. 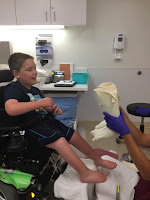 A specialist called an orthotist creates a "cast" of each leg and has to do it in such a way that it will be comfortable in a standing position.  Cam has always been the perfect patient when it comes to casting.  The whole procedure is quite fascinating and not uncomfortable for him so that helps tremendously.
Jane thinks the boy choices for cast colors are a bit lacking but they have modernized the technique and can make the entire brace a transfer of the pattern chosen.  This year, Cam chose the green camouflage (former Marine, Dad approves) and gray shoes.  And if you're wondering how much a custom piece of plastic runs in the orthotics department for AFO's, it is approximately $1000 per leg and insurance-approved. 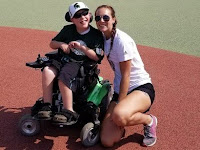 The routine of Saturday morning baseball has found a rhythm again and the fall warming trend has made for pleasant games for players and bystanders.  Ms. Lexi from the Aquinas softball team found Cam and asked to be his helper.  Once again, the generosity of others with their time is genuinely awesome to see. 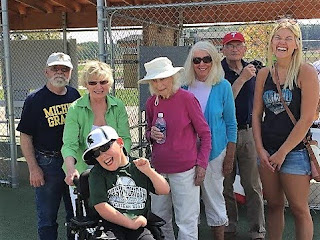 The Cam Fan base was strong this week- Ms. Amanda as well as the Gray Dunes crew in full force- Oma & Opa, Aunt Joyce & Uncle Joe, and Aunt Gay.
The travelers all scored some homemade oatmeal/chocolate/peanut butter cookies for their long drive home made by Ms. Amanda and Cam. 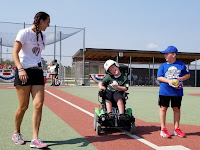 At the opening game last week, the coach realized that Cam's jersey wasn't correct- it had been printed for another team.  The president of the WMML personally told Cam he would have his Spartan shirt ready for Game 2 and he could keep the incorrect one.  Of course, Cam's jersey was ready and waiting for him.  Our thankful son insisted we send Tony, the president, an email, which we did.  Much to our surprise, we had a reply very quickly reminding Cam that he was such an important part of the Miracle League family! 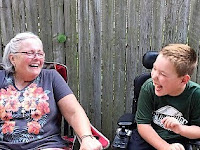 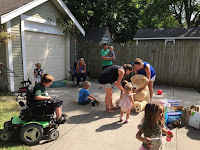 Saturday afternoon, we had fun celebrating Mr. Bexley's first birthday.  The homemade cakes and s'mores cupcakes created by Katherine were most delicious.  There were lots of kids and games and an enormous teddy bear.  Whenever Ms. Ann and Cam are together, laughter always ensues.  Ms. Ann sat down surprised that the chair was a bit further away than anticipated.  The laughter literally went on for at least 5 minutes between these two.

On the birthday boy's card, Cam asked us to write "Happy Birthday to my friend, Bexley.  You are my best new one."

Camology Quotes:
While at the birthday party, Cam asked to use the bathroom.  He was explaining to his parents how he knew he really had to go and had waited for the right time.