Reach for the Stars - Week of Sept. 18th 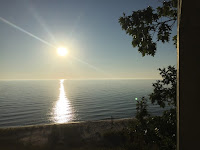 We talk about the weather a lot in Michigan.  It seems that the reasoning is because it is highly unpredictable and quite possibly the best place in the country to be a meteorologist, knowing you can't be held accountable for a forecast.
Indian summer is a period of unseasonably warm, dry weather that sometimes occurs in autumn in the Northern Hemisphere. The US National Weather Service defines this as weather conditions that are sunny and clear with above normal temperatures, occurring late-September to mid-November.   And that's exactly what we've happened upon this week. 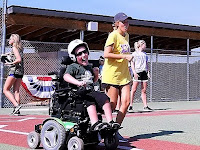 Saturday's weather promised steamy temperatures in the low 90's and we received an email Friday evening indicating that we could opt out of the WMML baseball game if we were concerned about our child in the heat.  As a family, we chose to have Cam play ball and stay hydrated!
The volunteer helpers were from the Hope College sorority, Sigma Iota Beta.  These girls volunteer every year and running next to Cam is Abbey, one of his all-time favorite helpers. 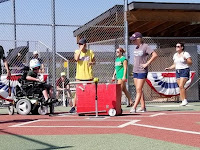 The batting box shown here is the highlight of every game for Cam. It was built and donated by an organization called MayWeHelp.org. 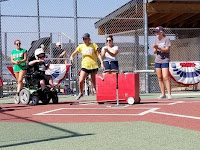 Cam drives up to the red box, which has a bat with a pulley system mounted on top.  The pulley is placed over his joystick.  He drives backwards as fast as he can and the pulley system releases to swing the bat connecting perfectly with the baseball.  Then it's off to first base!
We were thankful for blowing fans and cold water to make it through the afternoon heat. 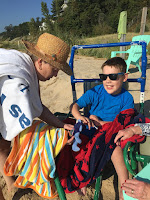 We planned to drive to the cottage right afterwards to see if we might take one last dip in Lake Michigan.  Not only was it an awesome beach afternoon, but the water was perfect for swimming- maybe even the best all summer.  JJ and Jeffrey were visiting from out east and had brought Cam a New Jersey police bear.  He was very thankful and told them it would be in his room where he would "see it every day." 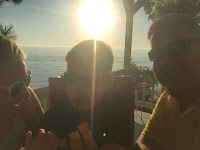 After cooling off in the water, we enjoyed our lakeside view for dinner on the deck.  Oma and Opa prepared a delicious feast, as always.  We were treated to homemade apple pie and ice cream for dessert.
It is never easy to leave the idyllic scenery, but even more difficult when the warm sunshine continues to sparkle on the refreshing water.

We departed as the sun was just about to set and had big plans upon arrival home. 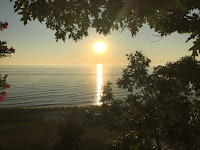 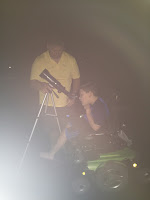 Grandma Sue sent Cam a big surprise in the mail for his birthday- his very own telescope!  Our scientific kid is very curious about space and the stars.  We promised him he could test drive his present that evening.  A galaxy full of thanks to Cam's grandma in Kansas for sending a gift our family will enjoy for many years to come!

On Sunday, Chris was flying to Orlando for a week long conference.  After Jane and Cam dropped him off at the airport, they drove downtown to take in ArtPrize Nine.  It was more than 90 degrees outside, but a strong breeze kept mom and son going. 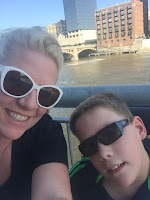 The majestic horse next to Cam is a finalist this year, made of copper and glass.  It was cool to the touch on a hot day.
Even with record temps, we were surprised to see so many others pushing through the heat.  It's hard to say, though, if anyone was more proud than this mom watching her son. 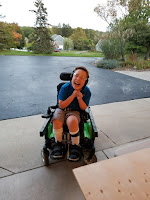 Camology Quotes:
Chris and Cam have begun Operation Halloween Costume in the garage. Each evening, after Chris arrives home, Cam is ready to begin construction.  As parents, it is rewarding to hear our son inquire about our day.