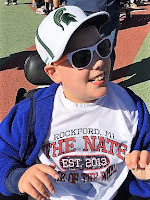 "By all these lovely tokens September days are here, With summer's best of weather And autumn's best of cheer." ~Helen Hunt Jackson 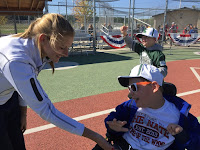 "There shall be eternal summer in the grateful heart." ~Celia Thaxter 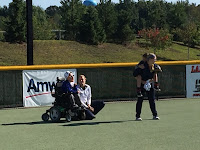 As fall approaches, a common question heard in our household is "when does my baseball start?" Thanks to the West Michigan Miracle League, Cam has been playing ball since 2014.   This league accepts players, ages 5-18 with different abilities.  Signing up online for a small fee confirms your child's placement as well a very cool team jersey and baseball cap.  In the spring, the shirts are adorned with pro ball teams, and for the fall season, college teams reign.  If there is a special request (for two pals to be on the same team, for instance) they always try to honor it. 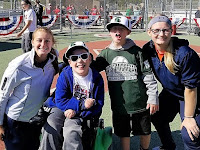 For the first fall season opener, the helpers were players from the Hope College Girls Softball Team.  They volunteered last year as well.  Britta, pictured with Cam giving a high five found us and asked if she could be Cam's helper because she also volunteered last year and was his buddy then!  We couldn't believe she found him.  He was very happy.  The other bonus is having one of your best friends on your team.  Brody is in Cam's 4th grade class and they ride the bus together.  These two crack each other up all the time. They also share the same teacher, Ms. Kathy, one of the biggest baseball fans around. Kathy and her husband, Kevin, were in the stands for the opener, cheering on the boys. 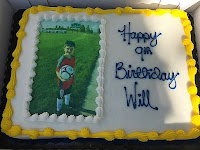 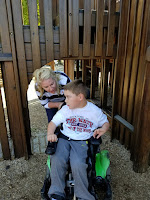 There was more to come for our Saturday, so we took advantage of a couple hours of relaxation before heading over to Hager Park for Will's 9th birthday party.  The soccer fan had played a game that morning and was ready for his celebration. 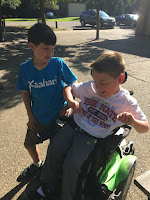 Hager Park has a huge wooden structure with ramps and playground equipment.  After exploring all of the recreation gear, everyone gathered at the picnic tables. 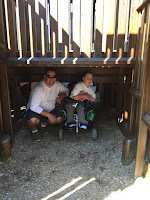 Auntie Jo brought in pizza and breadsticks for all. Although we had to leave a bit early, we were happy we met up with everyone, and had a breadstick for an appetizer. 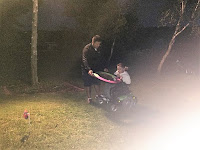 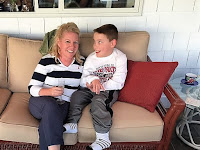 Next on our agenda was heading up north to Country Dairy, where we met Oma and Opa for a delicious dinner.  Country Dairy was established in its current location in 1983 as a milk processor and bottler.  The fourth generation general store, restaurant and Moo School attracts people from all over.  After our meal, which included free refills of self-serve chocolate milk (!), we all drove over to Stony Lake.  We were invited to a reception for Brian and Sarah who were just married.  Jane used to babysit the Stony Lake kids in the summer, and the combined families are life-long pals of ours.  It was such fun to catch up with everyone and all of the kids were so sweet to Cam.  Our son was a trooper after such a long day and evening, he even played a game of large ring toss before we departed Stony to head over to Oma and Opa's.  It was great to have a short drive to sleep for the night. 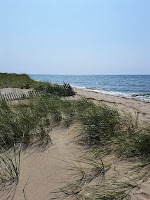 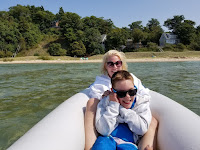 The next day provided plenty of sunshine and an inviting beach setting.  After having some time with Oma and Opa, we bid them farewell as they had reservations for a cruise around Muskegon Lake that afternoon.  After thanking them for everything (meeting us for dinner, homemade goodies, a place to sleep and the list goes on...) we then took our beach side seats.  The waves were perfect for a tour in the inflatable kayak.  Jane & Cam enjoyed the relaxing ride, while Chris paddled around Lake Michigan.
As we packed up our things, Cam looked at the lake and said "Goodbye Summer, see you next year."
Counting the days, summer, counting the days... 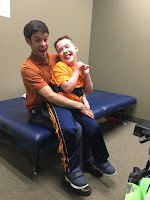 Camology Quotes:
Cam is still attending weekly PT appointments since his surgery recovery.  Jane found a place close to home, Center for Physical Rehabilitation, with awesome therapists.  One therapist Cam works with is a Grand Valley graduate and he had worked with Cam before in the program.  Patrick now sees Cam fairly regularly.  On this particular day, they both thought it was pretty funny that each of them wore blue pants and orange shirts!