“Words make you think. Music makes you feel. A song makes you feel a thought.” ~ E.Y. Harburg
“If everyone started off the day singing, just think how happy they'd be.”
~ Lauren Myracle 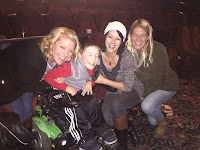 Cam loves music.  Every evening he requests to listen to songs during his nightly routine.

A recent release of the movie "Sing" came up in discussions during Cam's classroom time at school. 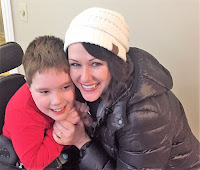 Somehow, everything aligned with a half day for Cam, a surprise visit from Auntie Roe, no class for Miss Amanda and some rescheduled meetings for Jane.  All of this led to four buddies happily catching a flick in the afternoon.  "Sing" was a great movie filled with many of Cam's favorites songs and a cast of hilarious animals that kept us all smiling. And popcorn, of course, there was delicious popcorn! 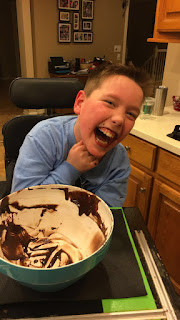 We are fortunate that Miss Amanda willingly gives up an evening most every weekend to hang out with her buddy, allowing Cam's parents an evening out.  A extra treat for Chris and Jane was a text from Amanda with a picture of their son and his chocolaty face along with this quote, "we are having so much fun!"

Oma and Opa stayed longer than expected on Tuesday when we received a two-hour school delay due to icy roads.  We were so thankful for their extended stay!

Cam kept saying to his dad "maybe they will cancel school today."  Chris told Cam, "that will never happen."

Shortly after 8am, the phone rang.  Chris quietly told Jane that in fact, school had now been cancelled for the day.  Cam couldn't believe it!  After telling the excited 3rd grader, he kept exclaiming "that is a new thing.  This has never happened before!"
When Cam's mom told him that his dad had called to tell us, his response was..."he had to call to tell me he was wrong about them not cancelling school today!"
Posted by Special Moms at 9:51 PM